A friday night classic at the Molineux 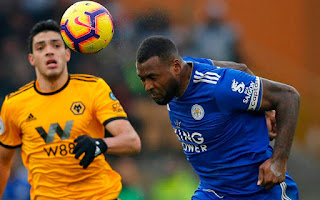 As a boy, I often imagined who would ‘win’ irregular brawls between animals in the wild. Say between a wolf and a fox.

The Premier League’s Wolves square up to the Foxes, however, in what is more than a clash of carnivores.

It presents a meeting of Midlands rivals and a tantalizing return to Premier League football after the winter break. Very impressive teams who have steadily evolved from the lower leagues to European contenders in the English top flight, find themselves needing to show their credentials for European places.

While third-placed Leicester are almost certain of a Champions League place this season, ninth-placed Wolves continue to threaten a top-six finish.

Both led by great young managers who have clear playing philosophies. Leicester have gone on magnificent leaps and bounds since returning to the top flight in 2014, winning the title in 2016; Wolves have evolved since Nuno Espírito Santo  brought them up to the league last season.

Brendan Rodgers has made Leicester an effective unit this season, employing a less-aggressive, possession-based style of attacking football which has seen them remain consistent in-between Liverpool and Manchester City’s title coup.

Indeed Wolves have been fantastic against the top six teams since returning to the Premier League in August 2018, this is more of a close-run battle between teams who mirror each other’s stories and ambitions.

Adama Traoré has been prolific, immensely improving his output this season having registered four league goals and seven assists whilst enjoying a telepathic understanding with Raúl Jiménez. The duo have combined for eight Premier league goals this season, a record.
Ben Chilwell would envisage a difficult night at left back but would be able to count on the support of in-form winger Harvey Barnes infront of him.

Perhaps Rodgers might opt for a back-three just to curb Wolves’ supremacy down the flanks.

The mid-season break would have done wonders for these teams, with League top goalscorer Jamie Vardy able to recharge the batteries and Wolves, who have played 41 matches due to Europa League commitments able to rest and recuperate.

Indeed, the corresponding fixture last season ended in a 4-3 thriller in favour of Wolves in one of the last games of Claude Puel’s reign; by all indications, the final scoreline might resemble the last one.
The pack is raring to go. A friday night classic awaits.
Advertisements
Bolu Alabi-Hundeyin
Features, Premier League, Tactical Analysis
Tags: Leicester City ,Premier League ,Wolves