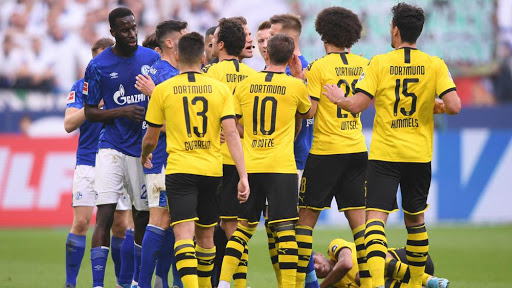 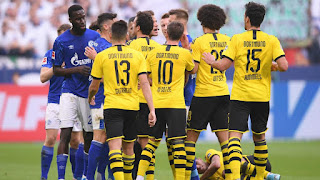 After the long break from football action for two months in Germany, and to some extent across different leagues in Europe, the Bundesliga returns on Saturday in a different dimension; an unprecedented one as it were.

Naturally, one would expect the action to return with a bang, but going by recent happenings, the supposed bang has been taken away by precaution due to the Covid-19 pandemic.

The effect of the global malady on the game cannot be overemphasized; and as a result, would have an adverse effect on the manner at which the players would approach tomorrow’s games, having been out of action for 60 days plus.

That said, German football returns with six matches on Saturday, two on Sunday and the last match of the round on Monday night. Of all the games that will be back on the screen this weekend, Borussia Dortmund vs Schalke 04 in the Revierderby is apparently the cream of the crop.

The duo have been familiar foes ever since the aftermath of their first-ever meeting on May 3rd, 1925. A match the Schalke side won by 4 goals to 2.

When these two behemoths of the Ruhr region in Germany go head-to-head on Saturday, it will be the 156th meeting between them.

And just like a popular saying in politics, “when two opposing camps go on a rampage, the line is drawn in the sand”

But in the context of football and derby, when two opposing camps go on a rampage, the line will be drawn on the pitch of play.

Now, the 156th meeting would be an encounter that will not be forgotten in a hurry by every individual who takes part.

The players, managers and most importantly, the fans (both young and old) of the two teams will live to narrate to their offspring how Coronavirus changed the tempo of the Revierderby.

The two biggest clubs in the Ruhr region are both in the European places as it stands and will want to hit the ground running with just nine fixtures left to play.

For the first time ever, the fixture will not be played in front of a roaring Yellow Wall at Westfalenstadion, with the game held behind closed doors to adhere to Germany’s social distancing restrictions.

Borussia Dortmund lie in second spot, trailing Bayern Munich by four points and sit a point better than the rest as they plot an end to the hegemony of the Bavarians over the rest of German clubs.

While Schalke currently occupy the sixth and final European spot but are just a point clear of both Wolfsburg and Freiburg.

Going into this game, Dortmund’s young guns look like the stronger side having picked up 12 points from their last five matches before the suspension of the league.

However, it won’t be all rosy for the Signal Iduna outfit as Schalke have dominated this particular encounter, the last time Dortmund beat Schalke at home was 2015.

This is a pointer to the fact that despite the inability of the fans to make it to the stadium, it doesn’t change the fierceness of what Revierderby brings.

The home side will be parading the youngest of players up front who have delivered consistently this season.

In Jadon Sancho, Thorgan Hazard, and Erling Haaland, they have one of the biggest and best attacking threats in the league and to a larger extent, Europe.

For Schalke, after a fantastic start to the season, they lowered their guard at some point and won just once in the eight matches before the league was suspended.

Their strength and source of goals, however, is found in midfielder Suat Serdar, the team’s highest goal scorer with seven strikes for David Wagner’s men.

This has been the bane of Schalke so far, the much-needed goals haven’t been coming from the attackers up front.

Apparently, it’s difficult to say where the pendulum would swing, putting into consideration the fitness of the players, coupled with the fact that the fans who cheer the two sides will be doing that from their respective homes.

But one thing is sure, we’re in for a massive encounter. The die is cast!