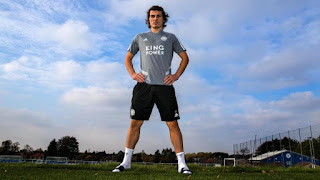 Harry Maguire’s successor in the Leicester City defence, Çağlar Söyüncü, has turned heads with some mammoth displays this season.
The big Turk has been ever-present in 2019/20 and scored his first Premier League goal with a stooping header against Crystal Palace.
Joining from Freiburg in 2018, the 23-year-old had been below-the-radar and profited from Leicester’s inability to find a late replacement for Maguire, who joined Manchester United in a record transfer last summer.
His leadership qualities have come to the fore since becoming a starter; comfortable on the ball and an assured aerial presence as he leads the squad on aerial duels won with 3.6 per game.
Söyüncü’s form is every bit as stunning as third-placed Leicester’s season; with the foxes boasting the joint-best defensive record with Sheffield having conceded eight in 11 outings, keeping four clean sheets.
Needless to say that Wilfred Ndidi has been Key to that defensive stability, having made the most tackles and interceptions in Europe’s top five leagues this season.
He protects the centre backs in Leicester’s high defensive line, giving Youri Tielemans and James Madisson the confidence to assert their creative influence further forward.
Söyüncü’s immense contribution to the cause reads 2.4 tackles, 1.6 interceptions and 5.5 clearances per game.
He loves to defend but can also play, registering the third-most completed passes (87.3%) by a Centre back. However, there have been a few dribbles and a Cruyff-turn which have raised eyebrows but only shown his confidence levels.
Additionally, Söyüncü is surrounded by the appropriate personnel to truly become world class.
Asides partnering experienced three-time Premier League winner Jonny Evans in central defence; Kolo Toure, a seasoned Premier League defender in his time, also forms part of Brendan Rodgers’ backroom staff.
The Foxes have emerged as serious challengers this season amidst Tottenham, Arsenal and Man United’s inconsistent form. Having surpassed their points tally after 11 games in their title-winning season, they seek stability as an established big side.
This young Leicester team plays an exciting brand of football, scoring the second-most goals and averaging the fourth-highest possession (55.6%) in the league. The full backs constantly push forward to influence attacks making Söyüncü’s recovery pace and strength pertinent in restarting attacks.
Whatever aspirations Leicester hold this term are greatly enhanced with Söyüncü in the side. The strong defender will also know he’s quickly becoming indispensable to Rodgers.
As this campaign’s performances cause Leicester fans to dream like the extraordinary title win three years ago; they are safe in the knowledge that a cult hero marshals proceedings at the back.
Ironically, Leicester are getting the kind of  £80 million influence expected of Maguire in his replacement.
Advertisements
Bolu Alabi-Hundeyin
Fantasy Premier League, Features, Player Analysis, Premier League, Tactical Analysis
Tags: Caglar Soyuncu ,Leicester City ,Premier League