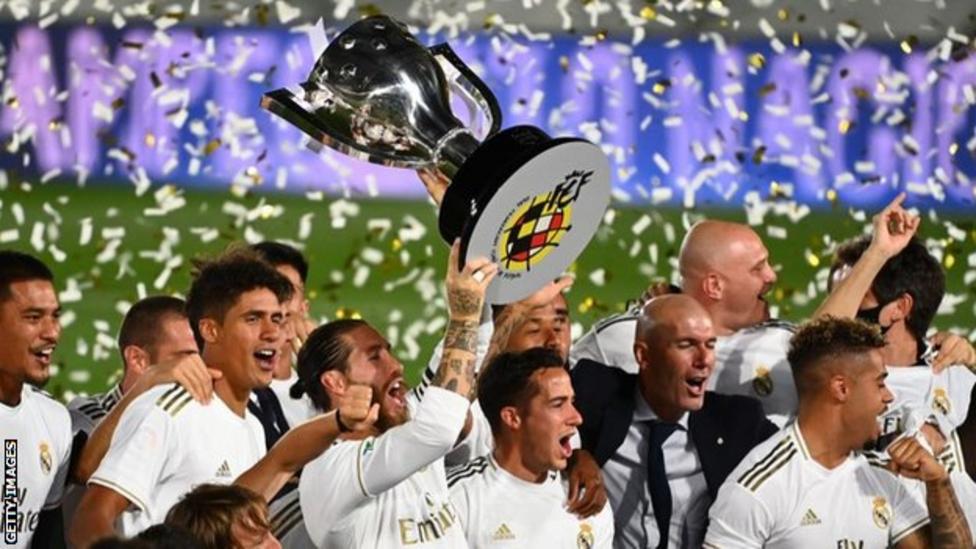 Real Madrid have been crowned champions of Spain after beating Villarreal 2-1 to confirm their first La Liga title since 2017 with a game in hand. The 34th league title success of Madrid’s history now puts them eight clear of deposed Champions and hated rivals, Barcelona

Los Blancos bounced back straight to the top of Spanish football after a season getting accustomed to life without Cristiano Ronaldo. Zinedine Zidane’s return for a second managerial spell signalled the start of their rebuild and maintaining such levels of consistency weekly over the course of a stretched campaign – without Ronaldo, no less – sits right up there with Zidane’s Champions League triumphs. The Frenchman is known to not have a structured tactical approach, rather giving the players the confidence and trust to win games.

How then, did the record Champions secure the 2019/20 crown?

Squad Unity: Maintaining the core of the same squad that won three consecutive Champions League titles, Zidane relied on every member of the squad, making everyone feel part of a common goal. This is emphasized by the 21 different goal scorers this season – bar Éder Militão and Brahim Díaz – even outcasts Gareth Bale and James Rodríguez have chipped in their bits when needed.

This togetherness breeds consistency, with 10 straight wins since La Liga’s resumption, Zidane has kept a large squad of superstars focused. Grinding out results, they have been very adaptable, too, with Zidane’s rotation and constant tinkering of his formation early in the season giving them a platform to constantly change shape for opposition. They have lined up in a 4-3-3, 4-2-3-1, 4-4-2, 4-1-4-1 and 4-3-2-1 in various matches for varying results this season.

Karim Benzema: In his 11th year as a Madrid player, Benzema has never been more important to the team. The Frenchman has registered 20 goals for consecutive seasons (21 in La Liga this season, only two behind Lionel Messi for the Pichichi award) and seamlessly stepped up since Ronaldo left to carry the team’s attacking burden in admirable fashion. Also putting in a massive shift with his workrate and application to the team.

Real Madrid must ensure proper competition for the striker’s position next season to remain ahead of Barcelona. For now though, this is Benzema’s Liga; his many highlights include the incredible left-footed volley against Valencia and the delightful back-heeled assist to Casemiro at Espanyol to put the title race firmly in their hands. For context, the 32-year-old has scored seven times since La Liga’s restart, the most in that period.

You could argue captain Sergio Ramos took the assault into his own hands from defence, but there Benzema was throughout every game, leading and defending from the front.

Defence: The class of 2019/20 racked up the meanest defensive record in Real Madrid’s La Liga history having conceded only 23 times in 37 games. The hallmark of this achievement has been the immense Thibaut Courtois who has improved from his first season, the Belgian shot-stopper has been vital in important moments (including keeping out Villarreal late in the title-clinching game). Courtois has also had a massive solid defensive unit in front of him, marshalled by captain Sergio Ramos, Ferland Mendy has also proved an inspired acquisition to solidify the problematic left-back spot.

The back-five, however, couldn’t have done it without the hardworking efforts of South American destroyers, Casemiro and Fede Valverde in midfield, with the attackers always willing to track back and help out as well.

Sergio Ramos: El Capitán, líder, leyenda. Real Madrid’s enormous captain personifies the resilience they displayed all through the season, he left his defensive duties and perhaps thought he was a centre forward many a time Los Blancos were in search of a goal. His late burst from defence to win the ball on the halfway line in the 80th minute and menacing run into Villarreal’s box to win a penalty, before going on to Pass (Like this Barcelona effort in 2016) his penalty kick to Benzema – which was ruled out for encroachment before Benzema’s retake sealed the points – quite simply summarises Ramos’ influence on the title winners this season.

The 34-year-old embraces his importance to the Madrid cause, producing his best goal-scoring league campaign to storm to a second Liga title as captain and fifth of his Blancos career. Alongside Benzema, Ramos was a major driving force to Real Madrid’s 10-game post-lockdown winning run.

Securing a league title with minimal contributions from the injury-hit Eden Hazard is a true Zizou masterclass. With very little need to add to an already fantastic squad of winners, given the Coronavirus-enforced financial climate and the return of loanees Martin Ødegaard and Takefusa Kubo, Real Madrid are adequately prepared for another title charge next season.