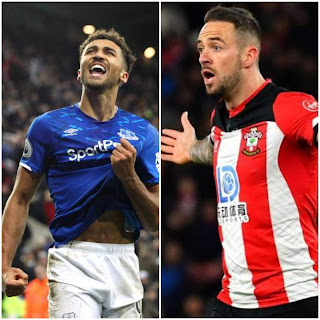 The 2019/2020 season began with many players harboring hopes of cementing or stealing a place in Euro 2020. As football is expected to serve its fair share of twists and turns, and up until the League’s suspension due to the Coronavirus outbreak, injuries to Harry Kane and Marcus Rashford, alongside Raheem Sterling’s struggles this season meant England were set to rely on a new face for goals this summer.
Enter Danny Ings and Dominic Calvert-Lewin, English strikers who have improved massively this season to step up with the goals for their respective clubs.

The Southampton frontman had ill luck with injuries since joining Liverpool in 2015 after breaking out in the Premier League with Burnley, having also shot The Clarets to promotion the previous season.
Indeed, Ings’ misfortune with injuries was such that he suffered an ACL injury on Jürgen Klopp’s first training session as Liverpool manager. Setbacks from which summarized his injury-ravaged three-year spell on Merseyside to four goals from 25 appearances.
The explosive striker has stepped up to become the key goal scorer Southampton craved in recent seasons, with 15 league goals in 29 appearances so far. Having had the whole of last season to get the body back to match rhythm, Ings has flourished under Ralph Hasenhüttl’s management
Where injuries robbed Klopp of utilizing Ings’ pace, movement and exceptional work-rate, Hasenhüttl has built his side’s fortunes around the Englishman’s qualities.
Meanwhile, only Jamie Vardy, Pierre-Emerick Aubameyang, Sergio Agüero and Mo Salah have scored more Premier League goals than Ings this season.
His goals have stabilized the Saints after flirting with relegation earlier in the season, coupled with that horror 9-0 home loss to Leicester City, which they have impressively recovered from as they sit seven points from relegation in 14th place.
At 27, Ings is approaching his peak years and would look to further establish himself as a top Premier League striker. Providing a highlights reel of brilliant finishes so far this season, the striker is fulfilling his potential.
Dominic Calvert-lewin
2017 England U-20 World Cup-winning striker Dominic Calvert-Lewin was a promising youngster who had proved an attacking misfit up until recently. Possessing tireless work rate, strong hold-up play and decent pace, the 23-year-old has elevated his game tremendously, adding a clinical edge.
A combination of Duncan Ferguson and Carlo Ancelotti have revived the striker this season. With Ferguson’s throwback tactics during his caretaker stint following Marco Silva’s sacking, allowing the ex-Everton no.9 to tailor Calvert-Lewin’s game to the basics. Carlo Ancelotti has, much to his credit, given the player the much-needed continuity by playing to his strengths.
Calvert-Lewin has flourished in a blossoming strike partnership with Richarlison in a 4-4-2 which has contributed 27 of Everton’s 37 league goals. His 13 goals and one assist means Calvert-Lewin has scored more league goals this season than all his seasons combined in the Premier League.
There have been goals against the big sides too; a brace against Chelsea, the spectacular overhead kick at Arsenal, poacher’s effort against United and the one against City in September.
Calvert-Lewin shows immense dedication to the Everton cause and combined with his impressive work ethic is reaping his rewards this season. His variety of goals and the presence of an equally hard-working partner in Richarlison would continue to provide chances for the frontman.
Key to the former Sheffield man’s form has been down to taking more shots at goal. As Calvert-Lewin’s scoring rate this season has soared due to an increase in shots per game to 2.4, a career-high shooting frequency.
The suspension of the league would worry Calvert-Lewin, as he was on a run of five goals and one assist in his last seven games. However, having turned 23 only a fortnight ago, he would be keen to prove his class as soon as football commences.
From scoring England’s winner in that World Cup final three years ago to being touted for the top in England and Europe by Ancelotti. Dominic Calvert-Lewin has lived quite the journey.
Indeed, while Danny Ings is finally fulfilling his potential, Dominic Calvert-Lewin is excitedly delivering on early promise.
Advertisements
Bolu Alabi-Hundeyin
Fantasy Premier League, Features, Player Analysis, Premier League
Tags: Danny Ings ,Dominic Calvert-Lewin ,Everton ,Premier League ,Southampton