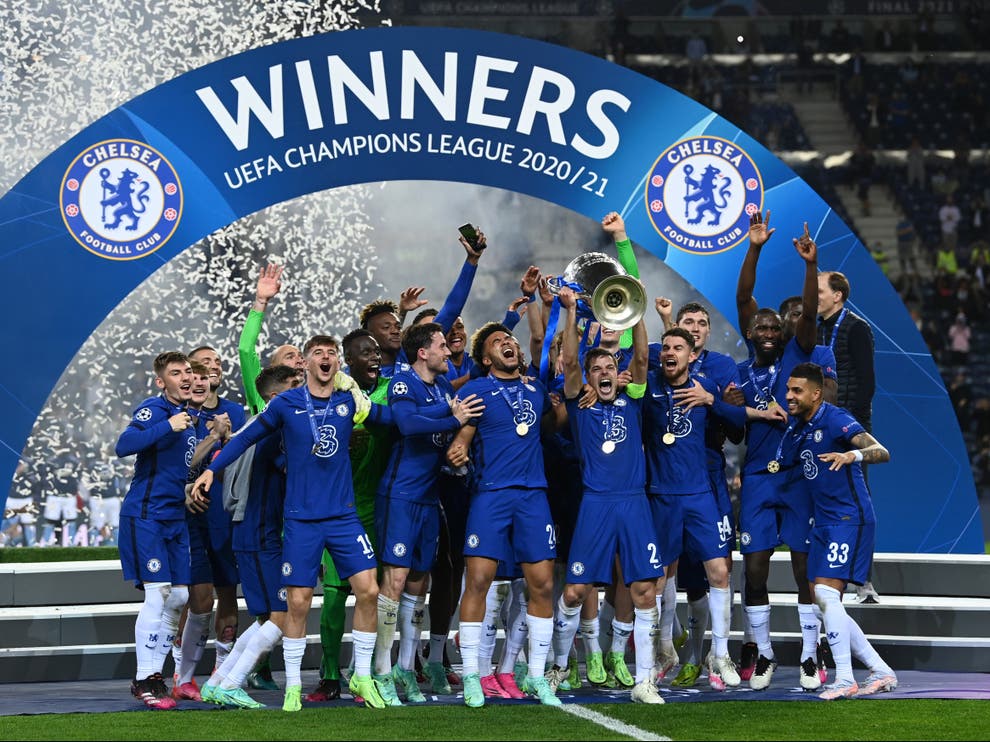 Cesar Azpilicueta leapt for joy as he hoisted the 2021 Champions League Trophy with huge relief from the nine years of immaculate service to Chelsea Football Club. The blues were crowned European champions for the second time as they beat Pep Guardiola’s side for the third consecutive game and first loss in this season’s Champions League.

The 90 minutes were a spectacle worthy of Europe’s biggest game this season as Thomas Tuchel’s side were heroic against the Premier League Champions Manchester City.

The game was sealed by a 42nd-minute Kai Havertz break-away goal to seal a deserved 1-0 victory.

Individually, each Chelsea player won their battles and it set the tone for a collective magnificent victory in front of 14,110 in Porto. Thus, Football Castle presents five talking points from the 2021 Champions League Final won by Chelsea.

Showdown of the Youngsters – Havertz steals the show.

Much of the buildup to this showpiece had been about the Golden Boys of English football – Mason Mount and Phil Foden – threatening to light up the biggest game in European club football. But Kai Havertz had somewhat gone under the radar and the German started ahead of Christian Pulisic to steal the show from his fellow young attacking midfielders.

With N’Golo Kanté’s omnipresence giving Chelsea an irrepressible platform in the final; Mount’s superb pass picked out the run of Havertz into the huge space created by Timo Werner’s intelligent run and rounded Ederson to calmly finish into an empty net for his first Champions League goal.

The 21-year-old displayed ice in his veins just as he had done by chipping Thibaut Courtois to set up Werner off the crossbar in their semifinal victory over Real Madrid. Havertz became the first player to score his first goal in the competition in the final since Ilkay Gündogan in 2013. And indeed, became the youngest German to score in a Champions League final since Lars Ricken in 1997.

The £71m man has shown his worth as his ninth goal of the season delivered club football’s biggest prize after a difficult first season in England.

At the other end, Reece James was equally immense as both Chelsea wing-backs stayed tight to their City forwards and denied them time to turn. His performance belied his tender years as he became the second-youngest Chelsea player to start in a major European final at 21 years 172 days.

Pep Guardiola’s decision to start without a defensive midfielder backfired spectacularly as Chelsea bossed the middle of the park in the opening half.

Without a destroyer in City’s midfield, Kanté had free reign to wreak havoc, picking up every loose ball and driving his side forward.

Guardiola normally has one tactical brain freeze in him a season and he usually reserves it for the biggest games. He was true to form. The 50-year-old has made big mistakes in previous European exits and his decision-making came under intense scrutiny after past defeats to Monaco, Liverpool, Tottenham, Lyon, and now Chelsea.

Unsurprisingly, he contrived to second-guess Tuchel after two losses to Chelsea since the German took over. Pertinently, Mount’s killer pass between John Stones and Oleksandr Zinchenko was through precisely the zone an orthodox holding midfielder would usually have been occupying.

Guardiola has now lost his first cup final as City manager, with this defeat only his second in a major cup final. He has also lost to Chelsea more times (eight) than to any other club in his managerial career.

On the other hand, Tuchel kept things simple with Havertz joining Werner in attack where his guile negates his compatriot’s lack of composure in front of goal.

Tuchel became just the second manager to record three consecutive wins in all competitions against Pep Guardiola, after fellow German Jürgen Klopp in 2018 with Liverpool.

There are many subplots and heroes to the story of Chelsea’s successful Champions League campaign. However, not many were as gobsmacking as their Senegalese custodian who became the first African goalkeeper to appear in a Champions League final.

Édouard Mendy kept nine clean sheets in 12 games in the successful Champions League campaign – the most ever by a goalkeeper in their debut campaign. In fact, no keeper has ever kept more in a single season in the competition.

A team notoriously susceptible on the counter-attack under Frank Lampard went through seven Champions League knockout games conceding only twice and Mendy’s calmness between the sticks was a difference-maker.

Mendy was a slight doubt for the game after injuring his ribs in the final Premier League fixture, but nothing could deny his finest hour seven years after going clubless and unemployed.

Against the best attacking side in Europe, he exuded confidence and faced only a single effort on target.

City are domestic monsters but Chelsea are European Masters

Chelsea showed their European Pedigree on the night as they became the first club to win all three major European titles twice.

In what was their fourth European success in the Roman Abramovich era alone. The loss to Manchester United in the 2008 UCL Final proves the club’s only loss in a European showpiece.

While Man City have won five Premier League titles and many more domestic cups in the last decade. Chelsea have picked up four major European Cups in four finals during the same period.

It charts the priorities of both heavily-funded clubs, as Chelsea’s owner has set about making themselves one of the best in Europe while City were only breaking their duck in the European Cup final.

Man City will be back nonetheless, but no club has lifted the Champions League in their first final as they join Tottenham and Paris Saint Germain in losing on their first appearance in the last two campaigns.

Project Tuchel is on

Lifting the Big Ears is a sweet reward for Tuchel after losing the Final with PSG last year. The German has won admirers for his tactical prowess and how he united an under-achieving group midway through the season.

Out-smarting his former mentor on the grandest stage will surely earn him a contract extension and the Chelsea hierarchy will be keen to deliver on his transfer targets as he seeks to strengthen his squad and mold his own team over the summer.

The 47-year-old has already created a special bond within the group and his incredibly talented squad have merged work ethic with solidity.

He admitted to meeting Abramovich for the first time after the game on the Porto pitch and his boss will most likely invest in the team’s weaknesses, especially in the goalscoring department.

The prospect of Tuchel’s side becoming more clinical will truly strike fear into domestic and European rivals, and Tuchel has delivered on his first promise of making Chelsea a team no one wants to play against.