Why AFCON 2021 rivals Will Be Wary of Nigeria 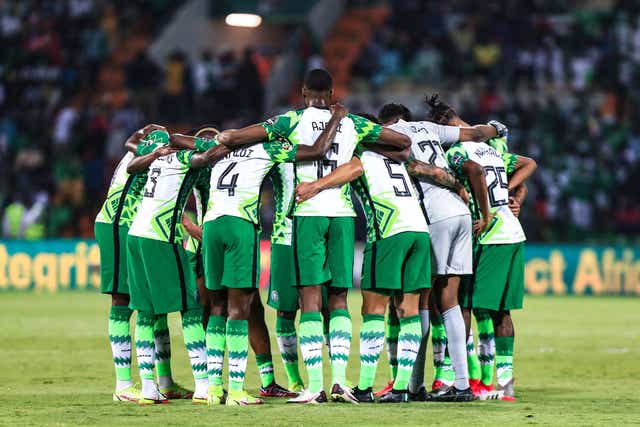 Nigeria are through to the last 16 of the Africa Cup of Nations after securing a 100% record in the group stage. The Super Eagles saw off Egypt in the opening game, before sealing progress with a game to spare against Sudan and asserting their dominance of group D in a commanding performance with a much-changed team for Guinea-Bissau.

This comes in stark contrast with pre-tournament expectations when their preparations were troubled by the sacking of Gernot Rohr as well as the late withdrawals of Victor Osimhen, Odion Ighalo, Emmanuel Dennis, Leon Balogun and Shehu Abdullahi from the AFCON 2021 squad.

So how then were they able to rally to a perfect group stage record? FootballCastle provides insights in this tactical analysis.

Nigeria’s increased attacking impetus was suddenly noticeable in a wonderful first half against Egypt during which they overwhelmed the Pharaohs and were unlucky to add to Kelechi Iheanacho’s wonderful half-volley over 90 minutes.

The West Africans lived up to that bright start with another wonderful showing against Sudan on Matchday 2 when Samuel Chukwueze, Taiwo Awoniyi (his first at international level) and Moses Simon got on the scoresheet for a comfortable 3-1 victory that ensured progress to the Round of 16. Guinea-Bissau got perhaps the most accomplished performance when they were roundly dispatched 2-0 by a second-string side as Nigeria sealed the first perfect record at AFCON 2021.

Key to this new lease of life in forward areas has been Augustine Eguavoen simplifying the attacking balance and especially switching Simon to the left-wing where he has been given less defensive responsibilities.

The Nantes man has been encouraged to take on his man and drive forward based on his natural instinct and he is currently operating as one of the tournament’s most impressive players. The reward for that is a collective attacking effort with five different forwards getting on the scoresheet as Simon and Iheanacho have each grabbed at least a goal and assist.

Nigeria are duly the second top-scorers at AFCON 2021 behind hosts Cameroon.

A good backline is the hallmark of a winning team, and Nigeria so far have a water-tight unit despite their good work in attack.

The Super Eagles have kept two clean sheets from three games whilst conceding a soft penalty against Sudan, with only Senegal having let in less goals (0) at the tournament. This has been made possible by an impressive balance fostered by Eguavoen with William Troost-Ekong marshalling the defence.

The Nigeria captain is enjoying a wonderful upturn of form since AFCON kicked off – in the same vein as Simon – and has been able to lead a stingy defence protected by the screening excellence of Wilfred Ndidi in midfield. Troost-Ekong has remained consistent despite appearing alongside different central defensive partners and his confidence could make a difference for Nigeria in the knockout rounds.

Nigeria’s interim head coach was not the favourite to take over from Rohr but he has now recreated his record as the only coach to lead the country to three AFCON group stage wins having done so at Egypt 2006.

The 56-year-old has brought a refreshing feel to a new-look Super Eagles side and that unfamiliarity could see them through in Cameroon. The AFCON 1994 winner won the Bronze medal as coach 16 years ago and would be desperate for better fortunes which would make him just the third man to win the tournament as a player and coach.

With the winning mentality and air of invincibility inherent in the Nigeria squad at the moment, they will take some beating in the knockout rounds and rival teams will be wary of Nigeria.

Eguavoen made eight changes in the 2-0 win against Guinea-Bissau and was able to play every single outfield player in a game where they also kept a clean sheet.

That confidence and togetherness will stand the squad in good stead going into the knockout rounds where every player feels part of a collective effort and they can compete for spots in the team.

Although a few players certainly need to do more to be trusted in the knockout rounds, there were decent showings from the likes of Semi Ajayi, Tyronne Ebuehi, Jamilu Collins, Kelechi Nwakali and Chidera Ejuke.

Knowing that there is more to the team than the starting lineup, the Super Eagles will be confident of taking on all comers in the Round of 16, and opponents will hope to avoid this ever-improving side during the knockout stage.