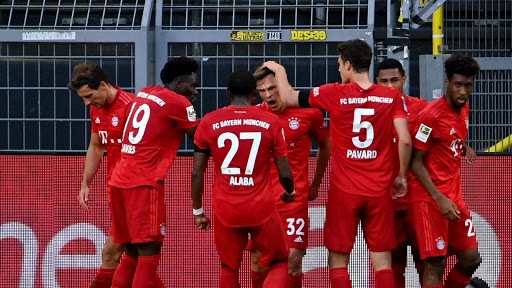 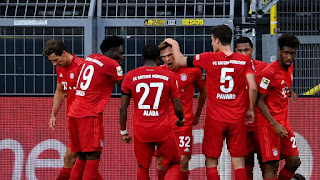 Not even a global pandemic and subsequent two-month pause could flip the script on Bayern Munich’s stroll to a record eighth Bundesliga title. Germany’s biggest football fixture was the biggest live sporting event in over two months since the Coronavirus outbreak, with fireworks expected in the title match.

It required Dortmund to switch into extraordinary gears to upset the rejuvenated Bavarians – especially in an empty Signal Iduna Park – but they were undone by a Joshua Kimmich chip from outside the box in Der Klassiker.

BVB failed to reduce the deficit as Bayern established a seven-point lead over their rivals to all but wrap up the title – once again –  with six games to go.

Both sides came into this with six wins on the trot, separated by only one point. Bayern have been here before and set about their business with superior execution.

Dortmund coped admirably with wonderkid Alphonso Davies’ pace going forward but could do nothing about him getting back to spectacularly foil Haaland when through on goal.

Alphonso Davies made more sprints (30) and hit a higher top speed (35.27 km/h) than any other player on the pitch in the first half of #DerKlassiker 💨

*pretends to be shocked* pic.twitter.com/11zLtiGjI5

The hosts seemed incapable of surmounting the champions, as has been the case with all their domestic opponents for the past eight years, and were shorn of the vociferous support of the yellow wall to provide inspiration for their aching limbs. They would lose Haaland to injury in the second half and looked rightfully knocked out of the title race.

It concludes the same story for Dortmund, and the rest of the league, after a curtailed period of pressure have failed to dislodge these extremely consistent Bavarians.

However, not for the lack of effort or quality young players. Quite the opposite.

Bayern Munich bear a psychological superiority over the rest of their domestic opponents and have expertly ushered in a new era of young and experienced veterans under Hansi Flick’s management.

Bayern have now won 21 of 24 games since the former Germany assistant manager took over and are only seven short of last season’s goals total (88) with six matches left.

READ ALSO: Alphonso Davies is back running the flank

Robert Lewandowski keeps banging in the goals, Thomas Müller has been reinvigorated in a midfield role to become the chief creator alongside Joshua Kimmich and Thiago Alcântara, in defence Davies has been immense in both phases expertly supported by David Alaba, Jérôme Boateng and Benjamin Pavard.

Whilst their rivals are left plotting to dislodge these behemoths, the record champions look set to dominate Germany for a little longer.

For once though, it was good to watch some truly competitive live football, a great step on the road back to normalcy denied us by the pandemic.

Second Chance: Which players has the lockdown favoured?

1 comments on “Bundesliga: Same old story for Bayern and Dortmund”