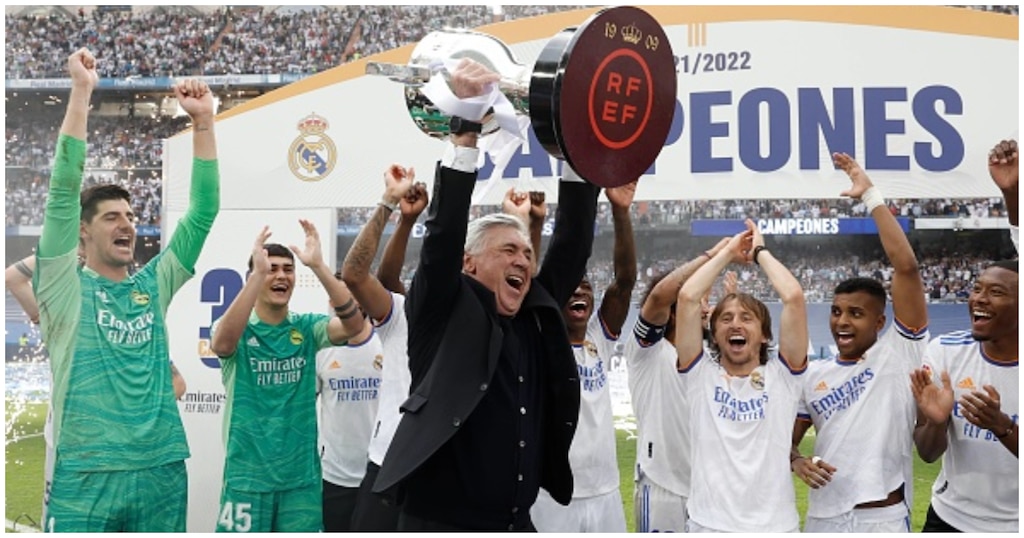 Real Madrid have never stopped winning and they added yet another trophy to the illustrious cabinet as the 2022 La Liga title was wrapped up with four games to spare.

After the return of Carlo Ancelotti at the start of the season, Madrid rallied and ran virtually unopposed since going top of the table. For the Italian, he is now the first manager to win a top-flight title in all of Europe’s big five leagues.

The 22nd trophy of his legendary managerial career held significance in many ways as it was also a record-extending 35th league title for Los Blancos.

So how was Ancelotti able to galvanize this ageing squad to win the season’s marathon with four matches to go?

The tactician has made a career out of adapting to the talents at his disposal. Famous for his calming personality which improves the family atmosphere in his teams, Ancelotti seeks to work with and improve his players rather than impose his style on them (Filippo Inzaghi, Andrea Pirlo, Kaka, Didier Drogba, Frank Lampard, Angel Di Maria, Dominic Calvert-Lewin, Vinicius Junior and Karim Benzema are just a few to have enjoyed individual best campaigns under his tutelage).

That flexibility has characterized the longevity of the 62-year-old’s career as he evolved with the times after breaking through as a disciple of Arrigo Sacchi’s philosophy.

Since winning La Decima – Madrid’s 10th UEFA Champions League – in 2014 and his hasty dismissal a year later, the Italian lifted three trophies at Bayern Munich and replaced Maurizio Sarri at Napoli until a dramatic exit. Ancelotti opted for a sensational adventure at Everton before leaving prematurely for a return to Los Blancos.

2021/22 has seen the rejuvenation of a squad which had been going stale in recent years and lost both Sergio Ramos and Raphaël Varane, as Eduardo Camavinga and David Alaba were the only senior additions.

Karim Benzema and Vinícius Júnior are having the most productive season of their careers at opposite ends of the age bracket as they formed a dynamic partnership in attack. Indeed, both men’s ability to switch roles from goalscorer to creator has been the hallmark of their season as Benzema leads the league assists chart (11) during his most prolific campaign (42 goals) while the Brazilian is into double figures for goals and assists, his highest-ever tallies in Madrid colours.

Defensively, they have conceded the second-least goals this season behind only Sevilla due to the brilliance of Thibaut Courtois and Éder Militão’s immaculate centre-back partnership with Alaba.

In truth, this latest title was massively aided by Atlético Madrid’s limp title defence and the Barcelona reboot. However, Madrid have always shown their persistence and quality as the likes of Lucas Vázquez, Nacho, Camavinga, Rodrygo, Luka Modric and Federico Valverde were willing to do the hard yards or put their versatility to use.

Yet for all his historic achievements last week, Ancelotti will be laser-focused on turning over their Champions League semi-final tie with Manchester City this week.

The former midfielder is already one of only three managers to have won the UCL three times but he is eyeing a fourth – the first to do so – and sixth overall as a player and manager.

A treble, alongside the Supercopa and La Liga, will paper over many mixed performances and remarkable comebacks this season, but it only goes to highlight the incredible adaptability and tenacity Ancelotti has fostered.

Indeed one of seven people to have won the European Cup as both a player and a manager, Carlo Ancelotti is a living legend that transcends several eras of the beautiful game.

For all that Pep Guardiola and Jürgen Klopp have achieved in the modern era, ‘Don Carlo’ remains an active reference at the very top of the modern game.