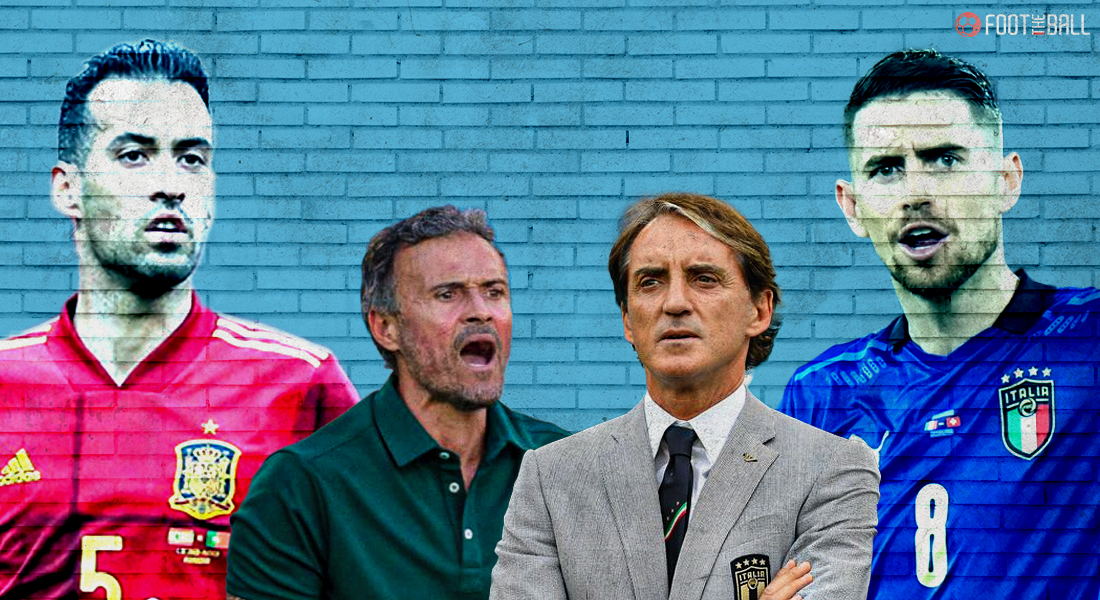 Spain versus Italy in any form is always an eye-catching spectacle as two of the most successful footballing nations put their differing styles to the test. Needless to say, the famous Spanish flavour of Tiki-Taka versus the home of Catenaccio is a football classic across any generation.

In Euro 2020, these European rivals on the world and continental stage are looking to rewrite history when they clash in the semi-final at Wembley.

In transition from their immortal World Cup-winning legends, both squads are similar in their respective rebuilding journeys which have been fast-tracked by impressive runs at Euro 2020.

There is a lot of familiarity between both nations, too.

This is the fourth straight Euro in which Italy have played Spain, with La Roja enjoying two wins (including the 2012 Final) and a draw before The Azzurri got sweet revenge in the Last 16 five years ago.

How did they get here?

The path to the Euro 2020 semi-finals has been anything but straightforward so far for Spain. Edging Switzerland on penalties, Croatia in extra time after a chaotic 90 minutes, and making hard work of the group stage, La Roja have a lot of questions still hanging over them.

Whereas they meet Roberto Mancini’s side who have been silky smooth since a statement 3-0 win over Turkey in the opening game. Maximum points in each of their three group games, beating Austria in extra time and sending the number one ranked side in the world, Belgium, packing in the quarter-finals. Have made all of Italy dream of a belated first Euro title.

They have also done this with the weight of pressure of a record 32-game unbeaten run as well as 12 wins on the spin, conceding only twice since the tournament began.

Jorginho, Marco Verratti, and Nicolò Barella have proved to be the best midfield trio on paper and on the pitch at the Euros. Beyond being tidy in possession, they press relentlessly and have bundles of energy that few in Europe could match.

They come up against a proud Spanish engine room which produced two of the greatest ever during their hattrick of major tournaments from 2008-2012. Although the current Spain crop are nothing close to the talents of Andrés Iniesta and Xavi, Italy would be confident of winning the crucial midfield battle.

However, the balance and maturity this Italian side are showing at the Euros is inherently similar to a vintage Spain team, and Federico Chiesa ran the rule on the tactical similarities between both sides.

“It is not that we are inspired by Spain, but we have almost the same ideologies of play: holding the ball, pressing high offensively, trying to dominate the opponent. Developments on the pitch are different. Spain have been doing it for several years, but we use our ball possession to finish, to have more scoring, to be more offensive, and to dominate”.

Roberto Mancini could still call on the impressive Manuel Locatelli in midfield. Leonardo Spinazzola who has been one of the best players in the tournament ruptured his Achilles tendon in the quarterfinal but his attacking runs from full-back will be ably deputized by Emerson Palmieri.

Can Italy harness their upper hand?

Crucially, the leadership of stalwarts Leonardo Bonucci and Giorgio Chiellini – Italy’s defensive generals and veterans of many a battle against Spain – could see Italy through against the reckless Spaniards.

Italy would also be well-aware of consecutive 120 minutes in the knockout stages for Spain, and their game plan would be hinged on frustrating the weary possession monsters.

While Luis Enrique’s side have had to grow into the tournament as they found their attacking balance, their opponents have been measured and workmanlike as they navigated a straightforward group stage campaign.

Italy have apparently been on a mission since their opening game and the focus is firmly on reaching the Wembley showpiece on July 11.

The maturity in Mancini’s squad which has also transcended on the pitch throughout Euro 2020, could make the difference on Tuesday night.