How much left in the tank, José?

The Football Castle > Blog > Features > How much left in the tank, José?
Advertisements 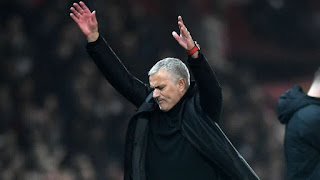 After José Mourinho’s recent comments about players needing to give their all at all times came another 2-2 draw at home to Arsenal.

The Manchester United manager made seven changes following the 2-2 draw with Southampton where he blamed some of his players for being too meek and lacking the fire to fight for the cause.
Changes to starting line-ups were rampant over this gameweek with the festive fixtures in mind but José was trying to send a message to his ‘underperforming’ stars also amidst an injury crisis in defence.
The gaffer continues to demand all sorts of reactions and performances from his players individually and collectively throughout their underwhelming season.
In a gripping game at Old Trafford, they delivered another gutsy albeit error-strewn performance; equalizing shortly after each Arsenal goal but individual mistakes ultimately cost them.
The United players constantly grind out results late in games and full credit to Mou for his tactical tweaks and motivational prowess in such games but this underwhelming group of players are critically lacking in confidence.
Mourinho was able to put together a defence line (Dalot-Bailly-Smalling-Rojo-Darmian) for the visit of Arsenal and to be fair they were impressive for injured or unfit players but errors decided the outcome of the game.
David De Gea’s error-strewn form for Spain has crept into the goalkeeper’s game at his club; he spilled Shkodran Mustafi’s header over his head and into the goal for the opener but redeemed himself later on in the game with crucial saves. Marcos Rojo gave the ball away for Lacazette’s goal but Arsenal were also shambolic at the backfor United’s goals.
José claims they shot themselves in the foot during the game and you couldn’t agree more. Although you have to laud the players’ fantastic spirit to recover from their errors.

He is trying to provoke a positive reaction from his regular starters and his makeshift defence could only complete the game without any injury  casualties.
It’s a famous Mourinho trait to not lose when they can’t win. The players seem to have taken it on fully by mastering the art of coming from behind.
Mourinho keeps getting these come from behind results from his squad but it is not what Manchester United aimed to achieve this season. They have fallen well behind in the top four race and wins alone are needed to get their season back on track.

Perhaps it’s already too much to ask for at this stage of the season, public criticism from the manager and being dropped puts that extra unnecessary bit of pressure on the players. With results looking the way they are and confidence levels not improving, it’s clearly not working for José.