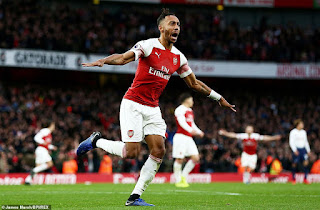 Arsenal versus Tottenham Hotspurs lived up to providing the most entertainment on Derby Day in the Premier League.
Six goals, two penalties, seven yellow cards, a red card, both sets of players clashing, a failed fight back and a come-from-behind win.
Much has been made of the changes Unai Emery has instilled at Arsenal. The gunners play with more speed and purpose and their Spanish manager has now steered them to a 19-game unbeaten run.
But this North London Derby could easily have been anything but a win for Arsenal last season.
The Gunners’ performance showed so much energy and grit and they continued the trend of performing better in the second half, it’s now 10 times in 13 matches that they have got a result after halftime and the positive energy around the emirates would only serve them well.
This performance firmly shows that the cobwebs of Wenger’s era are well and truly gone. Tellingly though, Arsenal dealt their North London rivals not just a derby setback but a psychological sucker-punch in the top four race.
Confidence is sky-high at the moment, Manchester United and José Mourinho provide the next big test on wednesday.
The Chelsea-Fulham game is a derby on paper but there’s barely any on-pitch rivalry between those two whose home stadiums are less than a mile apart.
N’Golo Kanté and his position in Maurizio Sarri’s Chelsea XI has come up a lot in the last one week after the best holding midfielder in Europe wasn’t back to help out the Chelsea defence whilst Tottenham delivered a spanking at Wembley.
Kante’s job in the box-to-box role is to win the ball as high up the pitch as possible and distribute to his more attack-minded teammates as well as be available in the attacking third for creating final passes and taking shooting opportunities.
It is easy to think Kanté cannot excel as a midfielder in the attacking department but his speed on the ball is also very important in carrying the ball to the attack and Chelsea’s first goal yesterday clearly shows an element of this role.
He robbed Jean-Michel Seri of the ball in the centre circle and drove towards the penalty area with the ball, arriving on the edge of the box, he fed Pedro who duly finished to give Chelsea the early lead.
Sarri has indicated that Kanté needs to stay close to Jorginho so as to help out defensively and it’s only a matter of time before it all clicks into gear.
I look forward to see him fully get to terms with his role this season. As the Chelsea squad continues to absorb what Sarri demands of them defensively and the possibility of Kanté making tackles and interception after interception high up the pitch and driving forward with the ball, a modern day Michael Essien beckons don’t you think?
Liverpool, playing with more solidity than fluidity this season seemed to be too much for Everton to handle before The Merseyside Derby.
The toffees’ winless record at Anfield in 19 years didn’t help their cause but winning football games is far beyond records and stats and derby games, more importantly, are adrenalin shots for confidence and changing fortunes.
Everton did come close to upsetting the trend in The Derby, the closest they have come in recent years, with Alisson making a point-blank save from a Andre Gomes diving header before Joe Gomez cleared off the line in extra-ordinary circumstances.
Liverpool threatened with several chances of their own but I felt the game would end a draw barring a dramatic late Liverpool winner. The drama would eventually arrive and to be honest I didn’t feel ready when it did.
Why on earth has Jordan Pickford kept a sliced shot that was destined for a goal kick in play and conceded a 95th minute winner? Yes his hand hit the crossbar as he tried to tip the ball over and it really was a freak incident but you have to question his reasoning behind trying to touch the ball when it was going over the bar.
Misfortune for Everton is Liverpool and Jürgen Klopp’s delight as title-winning teams should have the ability (and luck) to win games they shouldn’t have won and it’s an important trait to have which is further evidence that Liverpool will run Manchester City very close for the title this season.

All this must have been going through Jürgen’s mind when he ran onto the pitch to celebrate the goal, The FA’s disciplinary committee wouldn’t be lenient though.