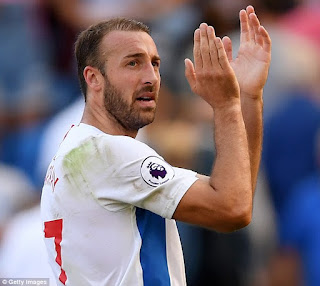 A quick glance at the English Premier League’s top scorers list bares the usual suspects;  Aguero, Aubameyang, Sterling, Hazard, Kane… Murray?
Brighton and Hove Albion’s Glenn Murray has so far scored seven goals this season. In fact, Harry Kane and Jamie Vardy are the only Englishmen to have netted more league goals in 2018.
That the Albion’s fox in the box is banging them in at the twilight of his career is all the more impressive given he has risen from lower down the leagues in English football up to the top flight.
It says a lot of the hard work and sacrifice this man has been through that he is enjoying a fairytale return to the Premier League after brief stints with Crystal Palace and Bournemouth.
Muzza is not blessed with pace and has drawn comparisons with Teddy Sheringham in that regard due to his longevity.
The 35-year-old continues to lead The Albion for goals just as he did last season and is firmly at the forefront of their hopes to stay in the League or even a top-half finish this season.
He is a calming and assured presence when leading the line for the Seagulls, holding the ball up to relieve pressure off his teammates and offering great link-up play.
Murray is a goal poacher and is massive in the opposition’s box with his intelligent movements providing most of his goals. Who would forget that deft flick against Manchester United earlier in the season?  His most recent was a near post header from a corner at home to Leicester City last Saturday.
It’s refreshing to see a thoroughbred English Striker enjoy admirable success in the English Top flight at that age. So much so that he continues to keep Jürgen Locadia and Florin Andone out of the team.  Not even a nasty head injury in the game at Newcastle last month could derail his form; he back was in the startling line up the following weekend against Wolves and duly netted his 100 th goal for The Albion.
His form in 2018/2019 led to some whispers for a call-up to the England national team earlier in the season but to be fair Muzza’s qualities are of no use to The Three Lions and we should simply enjoy his scintillating goal-scoring form, long may it last.
I’m certainly rooting for more of Glenn’s goals this season; he yet shows no signs of slowing down and could go on for a couple more seasons.
Advertisements
Bolu Alabi-Hundeyin
Features, Player Analysis, Premier League
Tags: Brighton and Hove Albion ,Glenn Murray ,Premier League