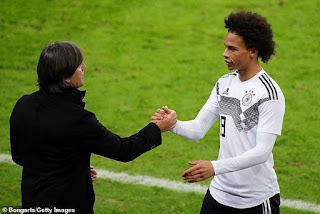 Leroy Sané had a slow start to the season.
After a great start last season, culminating in the PFA Young player of the year award at the end of 2017/2018. The Manchester City winger faced an indifferent start this term amid concerns over his attitude after missing out on the world cup over the summer.
The German flyer has had to make do with a place on the bench more often than not this season thanks to the form of Raheem Sterling, Bernardo Silva, Riyad Mahrez and even marauding left back Benjamin Mendy.
It isn’t a matter of tactics or getting used to Pep Guardiola’s ideas which the manager himself has made clear several times this season so expect to feel more of the speedster’s influence in games during this winter’s run of games.
The 22-year-old had to contend with the disappointment of missing out on Germany’s world cup squad over the summer and the birth of his daughter right in the middle of the international break in September but can now look forward to a more prominent role in the team in upcoming games. Perhaps, for the rest of the season.
Injuries to Benjamin Mendy, Bernardo Silva and Kevin De Bruyne have certainly paved the way for more starting opportunities for him, even more so with games coming thick and fast during The Premier League’s famously unforgiving run of fixtures over the winter.
The Speedster is an important component of Guardiola’s impressive attacking Arsenal; his mazy runs down the left flank stretches teams who sit deep to soak up pressure and his very wide positions- right on the touchline- creates space for David Silva to thrive on in the inside-left channel. He also possesses an arrow of a left foot and his deliveries into the box are as important as his goal contribution which already stands at three in the league so far despite his fleeting starts.
He could not have prepared for and grabbed his manager’s attention any better after netting twice for Germany in games against Russia and The Netherlands over the last fortnight, his first goals for Die Mannschaft.
Pep Guardiola is ready, Manchester City are ready, be ready.  It’s time to get #inSané
Advertisements
Bolu Alabi-Hundeyin
Fantasy Premier League, Features, International Football, Player Analysis, Premier League, Tactical Analysis
Tags: Germany National Team ,Leroy Sane ,Manchester City