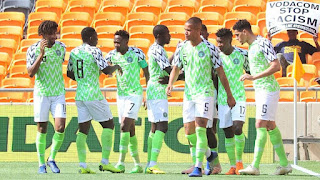 It’s been a long time coming but Nigeria are through to AFCON 2019.
The Super Eagles qualified for the Africa Cup of Nations with a game to spare. They return to AFCON for the first time since they won it in 2013 under the tutelage of the Late Stephen Keshi in South Africa.
Qualification was clinched in a 1-1 draw with South Africa in Johannesburg on Saturday.
The game saw Nigeria set the tempo early on, with a lot of running and trying to force the issue which resulted in the opener through an own goal from Buhle Mkhwanazi.
South Africa quickly restored parity with Percy Tau conjuring up some magic with his left foot to leave Kenneth Omeruo and William Troost-Ekong for dead then set it on a plate for Lebo Mothiba to tap in.
The second half was mostly passive considering the heat and altitude, Soccer city is some 1,500 metres above sea level, the players inevitably got tired and full credit to Gernot Rohr for his game management in the second half.
I reckon the gaffer planned to sustain some early pressure, grab a goal and sit back in the second period to avoid over-exertion given the conditions and several absences in the team added to the fact his team only needed a draw to qualify, it worked a treat.
Plaudits must also go to the Nigeria fans for the support before and during the game; I was left stunned on realizing that they outnumbered the home fans at the stadium and that fills me with pride.
South Africa were too tired to mount a serious challenge in the second half although I thought Staurt Baxter could have brought on hardman Dino Ndlovu and Vincent Pule.
Those two would have caused the tiring Super Eagles all sorts of problems.
The result could have been different for Nigeria as two goals were wrongly ruled out for offside. These officiating errors would have been devastating in different circumstances.
Perhaps CAF could introduce Video Assistant Referee (VAR) for the tournament coming up next June, its already been used in the CAF Champions league final earlier this month.
I’ve been absolutely buzzing for the Super Eagles since full time on Saturday given that they seemed to be on top of the world (well, on top of Africa) after that triumph five years ago that I began to look forward to continental dominance for years to come.
The intervening years brought heartache and shame as The Super Eagles failed to qualify for the two AFCON editions since, meaning they have been unable to defend their 2013 crown.
Looking forward, despite running the risk of getting ahead of myself. The prospect of a successful title defence after 6 years is simply sensational
Advertisements
Bolu Alabi-Hundeyin
Features, International Football
Tags: Africa Cup of Nations ,Nigeria National team