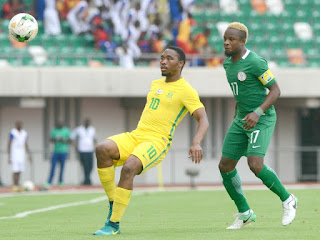 The international break is upon the football universe for the final time in 2018 and competitive campaigns in Africa arrive at the business end.
The South Africa versus Nigeria match at FNB stadium in Johannesburg on Saturday by 2pm Nigeria time in the Africa Cup of Nations 2019 qualifiers is one with so much at stake.
This fixture usually draws massive interest and the latest instalment is finely poised: qualification in the bag for the winner, Nigeria looking to avenge the painful defeat in the first leg of June 2017, SA looking to maintain home pride and their recent positive results in this fixture whilst both sets of players will want to prove themselves in the absence of so many regulars.
Stuart Baxter’s men are without Subisiso Vilakazi , Keagan Dolly, Dean Furman amongst others and would bank on their home support to roar them to victory. Although the presence of Nigerian fans for the game should not be understated.
Nigeria fans would have been very confident after last month’s internationals but Odion Ighalo, who netted five times over two games against Libya last time out unfortunately misses out through injury.
Goalkeeper Francis Uzoho is another injury absentee and Wilfred Ndidi is suspended for this clash, leaving Gernot Rohr with enough challenges to overcome.
Bafana Bafana though, would be concerned about the opponents’ available players and Ahmed Musa’s burning pace would give them much to ponder.
Musa’s speed would be very important for The Super Eagles if under pressure and needing to go on the counter.
Alex Iwobi has been different class so far this season and becomes a different animal when he puts on the Nigeria Jersey.
Iwobi posses an enormous threat between the lines and his passes would be key in the amount of service the Nigerian attackers get. Hlompho Kekana in the Bafana Bafana midfield has a massive job on his hands to keep Iwobi quiet.
Leon Balogun and William Troost-Ekong are expected to form Nigeria’s central defensive duo and would worry about Lebo Mothiba.
The RC Strasbourg striker possesses good finishing and can cause all sorts of problems with his back to goal, bringing his teammates into play.
Being Nigerian, I hope the super eagles grab the three points to qualify with one game to spare but the Super Eagles over the years have made an art of making things harder for themselves and South African rivals are certainly no slouch.
Bafana Bafana are not only backed by their home support, they do well against Nigeria these days as Nigeria haven’t been able to improve their record of seven wins against the South Africans.
A draw would keep both teams on track and South Africa would nick a qualification ticket alongside Nigeria if Seychelles can hold Libya.
Wayne Rooney’s return to the England squad for the friendly match against USA in a game that will be called the Wayne Rooney Foundation International has split opinions over in England.
Rooney retired from international football in September 2017 and the English FA will honour their record goal scorer with his 120th cap.
Critics say an England cap is being handed out freely but I think Wayne Rooney truly deserves it.
He has been an image of English international football having made his debut aged 17 before going on to become their most-capped outfield player and highest goal scorer in history with 53 goals. He’s been to six major tournaments and captained the team to one of those.
Rooney was under-appreciated amongst most fans because he was such an explosive early-boomer and when his age mates peaked he seemed to be on the decline. His commitment to the England cause has been immense
Young English players look up to him as a role model and he’s inspired a lot more all over the world.
This call-up presents the current crop of young English internationals who never got a chance to train with Wazza a chance to pick a tip or two from the legend.
The FA had planned to honour him in the pre-world cup friendly against Nigeria in June but Wazza himself didn’t want to distract from the World Cup which goes to tell you how selfless he is really.
Rooney is scheduled to come on in the second half of the game against The US wearing his famous no. 10 shirt with Fabian Delph promising to pass on the captain’s armband once he comes on.
The arrangement is simple enough for me and properly honours the man. It is a fantastic opportunity for Wazza and his family to get the appreciation they deserve and a chance for him to bid a proper farewell to the fans.
Advertisements
Bolu Alabi-Hundeyin
Features, International Football
Tags: Africa Cup of Nations ,England National team ,Nigeria National team ,South Africa national team ,Wayne Rooney