Josh Maja sets Fulham off to the perfect start. 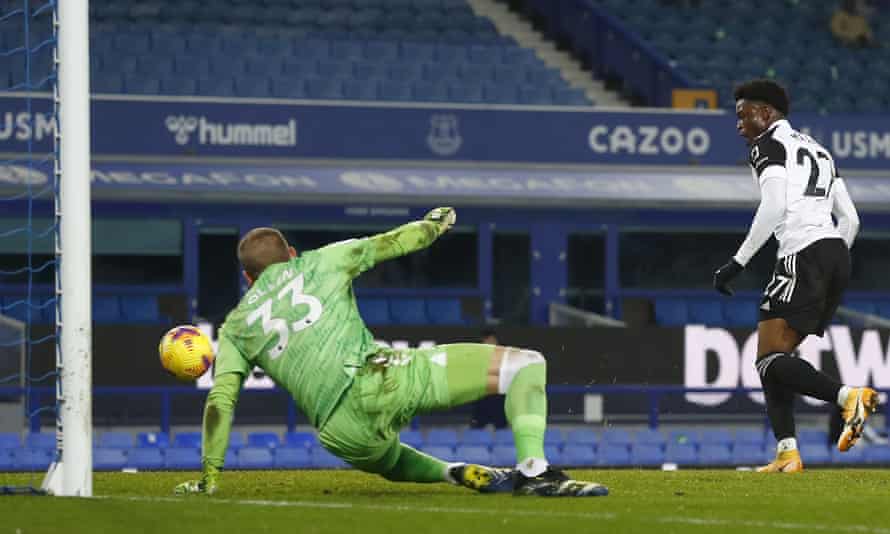 The Nigeria international joined Fulham on loan from Bordeaux on January transfer deadline day and scored the historic match-winning brace.

The Cottagers won their first-ever league game at Everton after 28 attempts, as they won their first league match since November after 12 fixtures (eight draws, four defeats). It is a win that gives Fulham a fighting chance in the relegation battle and Maja has already got off to the perfect start.

The Super Eagle brought his striker’s instincts into the team as he tapped in the first after good linkup play between compatriots Ademola Lookman and Ola Aina. He was then sharpest to pounce on a Harrison Reed rebound for his second.

Maja joined his former youth team who are in 18th place and adds the hunger and determination to impress in the English top flight.

Having had youth spells at various Premier League clubs, Maja could not get his big break with relegated Sunderland but shone for them in the lower divisions, before moving to Ligue 1.

The 22-year-old’s work-rate and movement across the frontline was the major reason for his acquisition as Aleksandar Mitrović otherwise offers a static option. Pertinently, he also possesses the holdup play and physicality the Serbian does.

His first Fulham start could not have gone any better.

On his stunning performance, Maja was understandably over the moon but cautious of the work ahead. “This is a night I have been dreaming about for a long time, especially last night and I had a feeling it was coming and pleased it became a reality.” He told BT Sport

“Wins give the fans and players confidence and we want to take it into the next game.”

“Fantastic tonight in terms of scoring two goals. The first move was brilliant and he is there to tap in and the second is a striker’s instinct to knock one in from the rebound off the post,” Parker said in a press conference.

“It has been well-documented that we have missed some big chances; the fine margins are we have not been clinical enough and tonight we were. A big boost for the team, nothing short of what they deserved.”

The former midfielder would now hope Maja can help Fulham attain consistency by turning many draws into wins, which would be vital for his side in the business end of the season.

“The difference today was we’ve put the ball in the net, there’s not been much difference about the last 13-14 games. We’ve drawn a lot, and I keep talking about the fine margins. I keep saying to this team you can’t keep producing what we’re producing without it turning a bit.

“I said in the week I’d be more concerned if we weren’t getting the chances, and today we put them away. I’m very, very pleased.”

Indeed, the result builds Fulham’s hope of a great escape as they lifted themselves back within seven points of safety – and should Newcastle lose at Chelsea on Monday night, they will have the opportunity to reduce that gap to four next weekend.

They would be particularly in good spirits knowing they face winnable games against Burnley, Sheffield and Crystal Palace next. A new striker and renewed energy would be key against three of their closest challengers.

After the perfect start, Maja must now focus on improving with Fulham, if he does, the Londoners could have pulled off the great escape.

Par for the course, earning a permanent transfer back to England would only be brilliant for his national team chances.