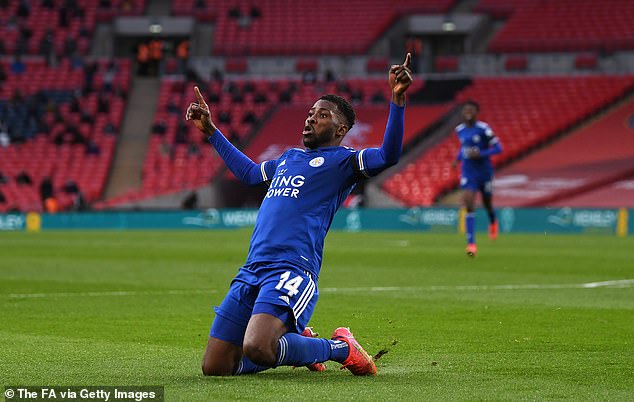 Leicester will take on Chelsea in the FA Cup final on May 15 after defeating Southampton 1-0 at Wembley. The Foxes reach the showpiece for the first time in 52 years.

It was a beautiful atmosphere with 4000 spectators from the local area allowed in a pilot event for the return of fans to stadiums in England.

On a glorious Sunday evening, Kelechi Iheanacho continued the form of his life with his 10th goal in seven games.

It was set to be a cagey affair with Ralph Hasenhüttl’s Saints and Leicester’s new marksman was on hand to provide the key moment.

The 24-year-old’s link-up with Jamie Vardy once again delivered the win. The Englishman, 10 year’s Iheanacho’s senior is enduring a goal drought having not scored for over two months has lost his confidence in front of goal but his selfless running into channels has marvelously benefitted the Nigerian.

4 – Each of the last four goals scored at Wembley in the FA Cup have been scored by African players – Pierre-Emerick Aubameyang's brace in last season's final, Hakim Ziyech yesterday and Kelechi Iheanacho today. Takeover. #EmiratesFACup pic.twitter.com/l7sq6uJlIa

55 minutes into the semifinal, Vardy’s movement on the left flank was dangerous, with the striker crossing for Iheanacho to shoot. The off-target effort bounced kindly and the red-hot striker turned in the rebound.

King of the Cup?

The world’s oldest club cup competition has long been Iheanacho’s avenue to keep fit and gain valuable minutes throughout his difficult career in England. Scoring his fourth goal in three consecutive rounds to lead them to a historic final proves his latest fairytale

“The FA Cup loves me, and I love the FA Cup,” Iheanacho said afterwards. His was a 14th FA Cup goal in 19 matches while no other player has scored more in the past five seasons.

Iheanacho is the first Nigerian to score 15 goals in all competitions in a season for a Premier League club since Odion Ighalo in 2015-16 for Watford, who scored 17.

“It is a dream come true,” Iheanacho told BT Sport of the achievement. “Loving it. I am happy. We did it together to get to the final. I watched the FA Cup when I was little and now I get the chance to play in the final. Such a big dream for me.

“We did it together as a team. I am proud of that. Really happy. We are really happy to have some fans today, it is not easy with everything going on but hopefully the final there will be a lot more.

The Nigeria international credits his prolific form to Vardy’s telepathic partnership in attack and good relationship off it; as they have started together since a change of formation.

“Jamie is the best partner you could want as a striker,” said Iheanacho. “He is really nice and has been since I came to this club. He is really funny and cracks people up. He takes that into the game and helps his mate out. Jamie is one man who is a team player and he is not selfish at all. He looks out for his mates.”

Brendan Rodgers summed up the Leicester emotions by praising his key duo and the improved atmosphere.

“His (Iheanacho’s) confidence levels are very high. Some of his set up play and build-up play was a bit loose today but his confidence was not affected by that. He and Jamie are a real threat but it is very much a team effort.

“Even though there were only 4,000 it felt great. It will be amazing when we get supporters back into stadiums. I did hear some Leicester supporters in there and it was really nice.

The King Power outfit have reached a fifth FA Cup final in their 137-year history and will now hope to upset Chelsea for their first-ever triumph.

Should they win the Cup on May 15th, Iheanacho’s exploits will be written all over it.