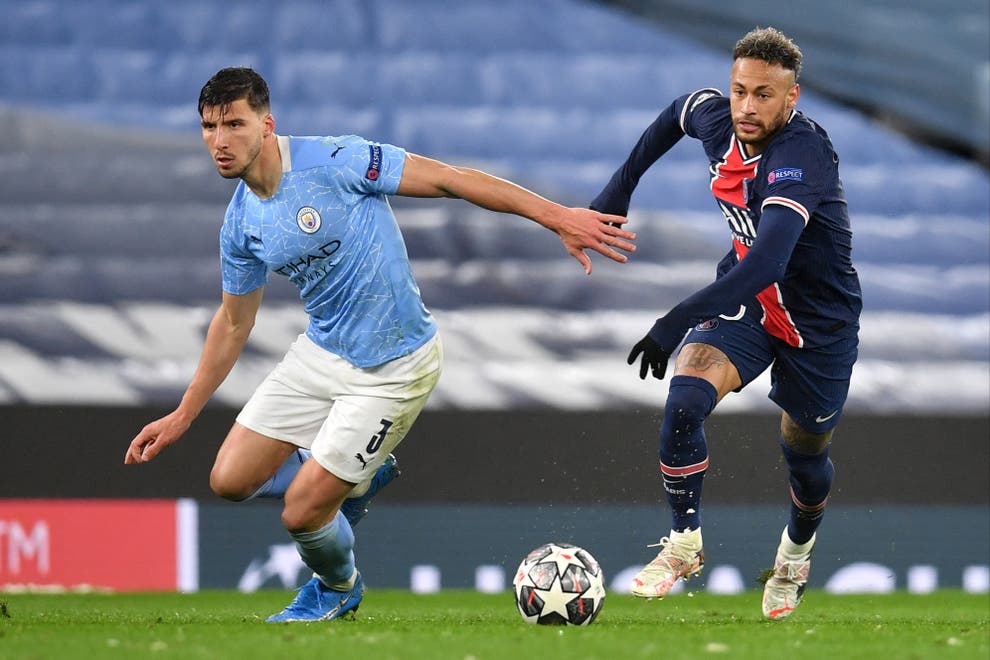 The second leg was a special night at the Etihad Stadium with a heroic 2-0 victory to seal the tie, thanks to Riyad Mahrez’s brace.

The game plan was to contain their opponents and absorb pressure, whilst hunting in packs and hitting them devastatingly on the break.

Rúben Dias was an absolute warrior as Man City reached their first-ever Champions League final. Helping to blank out one of Europe’s most-feared attacking forces.

Dias was a leader at the heart of the defence, throwing his body in front of PSG shots and organizing a disciplined backline.

The £62.1 million centre-back arrival from Benfica encapsulated the determination on a historic night.

Dias completed 100% of his tackles, registered 90% passing accuracy, completed three clearances, and made three blocks; as Paris were restricted to no efforts at goal.

Proud of this team! Let’s go @mancity ! Very happy to be considered man of the match! 🦈👊🏼 pic.twitter.com/mpuCGsUCy7

Kyle Walker, who was immaculate at right-back against Neymar, summed up the mood of his defensive colleagues.

“Obviously against top quality players, we needed to put in a shift.

“John, Ruben and Oleks, made some important blocks at crucial times and I thought we controlled the game well considering the amount of talent they’ve got up front.

“It’s a team game, we all go and celebrate a goal, we’re high-fiving when we score goals but for us as defenders, the main thing is keeping clean sheets.

“This season we’ve done tremendously well in doing that and really sharpened up on our defensive duties but blocking a shot is just like scoring a goal for me.”

City are the first English club to win seven consecutive games in European Cup competition, a feat which is not achieved on skill and silk alone.

This season’s newfound resilience was on show here, defensive defiance that stood up to PSG until they lost their heads again.

For the treble-chasing Cityzens, their team spirit was everything to this win.

Dias, Walker, Ederson, and John Stones formed a bouncing huddle of delight, while Zinchenko sunk to the pitch in tears of joy at the final whistle. City’s players know the importance of their defensive record in Europe, one which reads only four goals conceded all season with Ederson claiming the joint-most (seven) clean sheets.

Atypical of Pep’s City side, Ederson’s main contribution in Man City’s goal was not a save but a creative pass. The Brazilian shot-stopper hit a trademark long pass to Oleksandr Zinchenko up the left channel which helped stretch PSG and create the opening goal.

Dias embodies the other side of Guardiola’s ideology – the dirty side. And his impact at the Etihad now compares favourably with Virgil Van Dijk’s impact at Liverpool – when they reached two Champions League finals, won the European Super Cup, Club World Cup, and Premier League title – after the Dutchman joined to complete the jigsaw.

Guardiola was pleased with his “incredible” players after they surmounted their psychological hurdles to reach the Champions League final. The Spaniard will now contest his first European showpiece since winning it 10 years ago.

“What we have done the last four years has been incredible, in terms of the Premier Leagues, the Carabao Cups, the cups, and in every competition we’ve played.

“To reach the Champions League final is so difficult. It’s the toughest one but we did it. We’ve had an incredible Champions league season and now, we deserve to be there. We are going to play the final.”

Indeed, City are now officially gunning for a treble in Dias’s first season and it has already signaled the start of a new era for Manchester City in Europe.