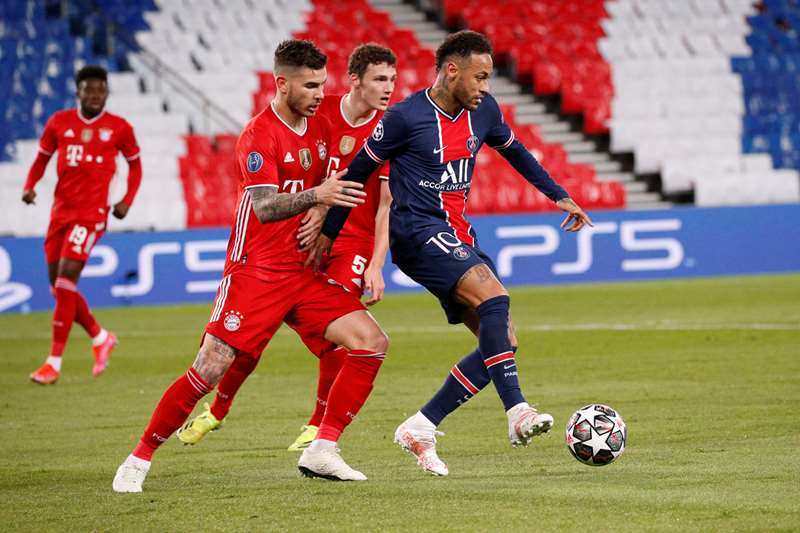 Neymar has addressed his future following Paris Saint-Germain’s UEFA Champions League quarter-final second leg. The Parisians avenged their loss to Bayern Munich in last year’s final as the 1-0 loss completed a 3-3 aggregate win on away goals.

After two assists in the 3-2 away win in last week’s first leg, Brazilian superstar Neymar put in a man-of-the-match performance, as he hit the bar and the post in a sparkling showing that only lacked a goal.

Neymar was typically amazing for his team; as his dribbling, creativity, and movement in tandem with Kylian Mbappé caused Bayern serious problems in a spectacular game.

Indeed, in a game that saw 24 shots between both teams, Neymar produced the most shots on the pitch (six), three key passes, six dribbles, and the most PSG touches (85); showing his team’s preference to allow him dictate play.

After the game, the 29-year-old took time to answer questions about his future with his contract expiring in 2022 and he is yet to sign an extension alongside Mbappe.

“Will I stay in Paris? PSG are a great team,“ Neymar said to RMC Sport when asked about his future. “Now we’re in the semi-finals and we can dream.

“I’m very happy. We faced a great Bayern team. Now we are in the semi-finals and we have to work even more, improve and hope to have a good semi-final.”

Discussing their performance as a whole, Neymar gave some insight into how the tie was secured.

“It is true that we speak a lot with each other, we are truly a team,” Marquinhos spoke to us during the match to help organize us. He said. “We saw that [Angel] Di Maria ran a lot today, we have to congratulate everyone.

“All those missed chances… I was missing by so little. The most important thing is that I’m very happy that we have qualified. PSG are a great team, now we have to focus on the semi-finals.”

After getting to their first final in 2020, PSG are back in the last four and are hopeful of going all the way with Mauricio Pochettino who took Tottenham to the 2019 final.

Club president Nasser Al-Khelaifi weighed in on the topic and is hopeful that the club’s Champions League run can convince both attacking superstars to stay.

“We have invested a lot in the club to win the Champions League and all the trophies available,” Al-Khelaifi told RMC Sport. “Neymar and Kylian have no reason to leave”.

“We really have everything to win every competition. We have a great team. We have respect for the others but we are there with them. We are working. And it is not over.

“We need to continue, to remain calm because the Champions League isn’t finished. We need to work more every day. The belief is there. The secret is work. The finer details make the difference too.”

Despite surviving another Bayern onslaught in the second leg in Paris, Al-Khelaifi was delighted with what he saw from the players.

“It is our aim to go as far as possible,” he said. “Our aim is to go to the final and win the tournament. We will take it match by match.

“Tonight, it was magnificent. We could have scored three or four goals, but in the end we have qualified. I have confidence in our team, which has grown and which has a lot of experience. We won against Barcelona and Bayern Munich, that means a lot.

“We have come to win the Champions League. I’m very proud of the team. The coach and Leonardo have done magnificent work. The players gave their all.”

Neymar and Mbappe now have their eyes firmly set on a semi final tie against Man City or Dortmund.

Domestically, the Parc Des Princes outfit are hoping to claw back Lille’s three-point advantage atop the Ligue 1 table.