Can Osimhen start off his Napoli revival against Milan?

The Football Castle > Blog > Features > Can Osimhen start off his Napoli revival against Milan? 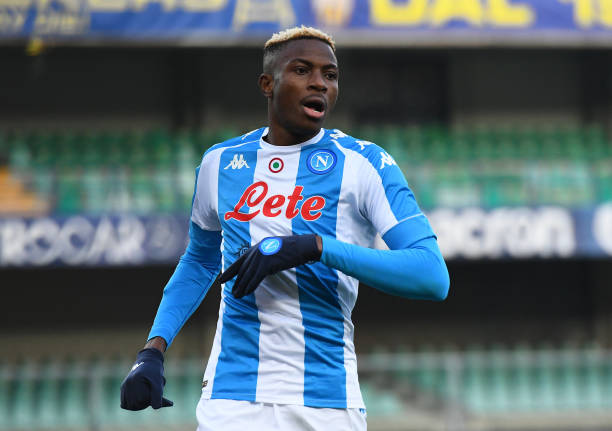 Victor Osimhen is yet to hit the expected heights for Napoli seven months after moving to Italy.

The striker arrived to much fanfare which was tempered by his adaptation to famously the most defensively-sound league in Europe.

An early assist on his second appearance against Genoa was a sign of things to come but untimely injuries have blighted his momentum.

Osimhen has only made 16 appearances in all competitions since his €80 million move from Lille last summer. The forward came off the bench to score only his third Serie A goal of the season against Bologna at the weekend

It was his first goal since he netted against the same opponents in early November.

This wasn’t the campaign the Nigerian marksman imagined after his big-money move to the Azzurri; Osimhen has played 11 times and started just seven league games, 44% of the club’s Serie A fixtures so far.

In his absence, the Stadio Diego Armando Maradona side sit sixth in Serie A as inconsistencies also saw them drop out of the Europa League to Granada.

A shoulder injury sustained in the November international break and coronavirus have hampered the 22-year-old in 2020/21, but Osimhen will hope Sunday’s strike in the 3-1 success over Bologna proves to be the turning point.

The Napoli number nine has been invited to Nigeria’s 24-man squad for the AFCON 2022 qualifiers against Benin and Lesotho later this month.

Before then, Napoli travel to the San Siro to take on second-placed AC Milan where he is 3.25 to score anytime.

Osimhen will be fired up for the clash against the out-of-form Rossoneri, whose early-season surge to the top of the league has been cruelly disrupted by injuries. The 22-year-old would be hoping to make a mark on the fixture which means a lot to his manager against his former team.

A win for Gennaro Gattusso over the team he famously played for and managed would be a huge catalyst for the Neapolitans who are three points off top four with a game in hand. The away side are 2.75 to win.

Should Osimhen have a vital impact on a positive result – as a substitute or starter – it could propel him to a bright finish to the season.