A Goal from Nigeria earns Leicester an important point 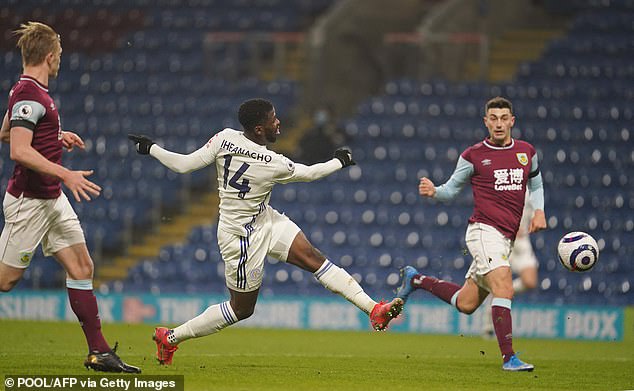 Leicester City ended a two-game losing run against Burnley by earning a point with a goal made in Nigeria. The draw steadied the Foxes in third place to stay one point within second-placed Man United and five clear of fourth place.

Kelechi Iheanacho scored his second Premier League goal of the season while Wilfred Ndidi provided the assist in Leicester’s 1-1 draw against Burnley on Wednesday night.

Iheanacho made his sixth league start at Turf Moor and utilized the opportunity to add to his tally this season.

Leicester Went behind early to Matěj Vydra’s first Premier League goal in 13 months and fought back to avoid a third consecutive defeat.

The Foxes made several attempts to level proceedings and were rewarded for their efforts when Ndidi sent in a fine cross to Iheanacho, who connected well and fired in a superb first-time volley past Nick Pope.

It is a goal befitting to win any football match and understandably delighted Nigeria fans as the striker finished off a dream pass from Nigeria’s Newly-crowned Midfielder of The Year.

“We’re talking about the little run from Jamie [Vardy] and the pass from Wilf [Ndidi] – that was the goal for me,” explained Iheanacho to LCFCTV. “So, it was a great goal.

“Playing with Jamie, I like playing with him. He’s a runner, if you have a great runner in the team, we know we have to find him, and give him good front passes for him to finish up. I like partnering with Jamie. It’s good.”

Iheanacho has had to keep up his match fitness in the cup competitions this season and an injury-hit squad has offered the 24-year-old starting opportunities in recent games.

The Super Eagle scored on his third Premier League start against Fulham early last month and has now started four of the last six league games.

He also scored a late winner against Brighton to take them to the FA Cup quarter-finals, making his tally six goals and four assists in 25 outings this season.

Iheanacho’s famous match-winning efforts are not lost on Brendan Rodgers who keeps the striker a part of his plans as they chase a Champions League spot which they painfully missed out on the final day of last season.

‘It was a brilliant goal (by Iheanacho), good movement from the two strikers and fabulous technique”. Said the Leicester manager.

‘Overall we take our point. We’re not in the top-four until the season is finished.

‘We have to go into the next game and keep working every day.

‘Everyone is talking about the injury list but we have to deal with it.’

Having been knocked out of the Europa League by Sparta Prague last week, the Foxes are well-focused on domestic targets and Iheanacho’s goal-poaching instincts would be a huge part of that.

Indeed, given a run of minutes and a couple of scoring chances, Iheanacho scores wonderful – rather important – goals. That’s what his short career has been known for.

Come the end of the season, Iheanacho’s mark on Leicester’s season might just be equally important as his Nigerian teammate and friend, the irreplaceable Ndidi.