Major Talking Points As Wolves Down Chelsea at The Molineux 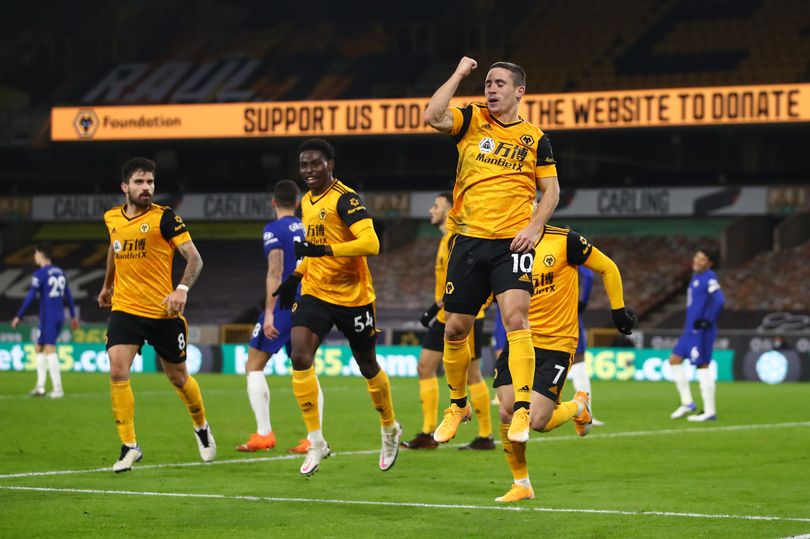 Chelsea lost to Wolves after a very lethargic performance from the blues. Some puzzling decisions from Frank Lampard combined with the tiredness of the team brought about a poor game from the London side. Wolves had lost the last two games since their win against Arsenal in which they lost their star striker Raúl Jiménez to a skull fracture. Against Chelsea, they reverted to their preferred back three after using a back four last time out against the Villans.

Chelsea lined up in their 4-3-3 formation. They lost to Everton on Saturday and they were looking to bounce back from their second defeat of the season. The blues had the upper hand in the first half despite what the shot on target stat had to say. However, some baffling tactical decisions, poor play, and fatigue would steer the game into the hands of Wolves as they secured a win in the dying minutes of the game.

We analyze the major talking points from the game.

Chelsea’s Germans Are Struggling To Adapt

Timo Werner arrived from the Bundesliga amidst a lot of fanfare but he has failed to produce his best performances in a blue jersey. Of course, it is good to give players time to adapt but Werner has been in terrible form for a while now. Failing to score in his last eight games amidst a raft of big misses.

He was constantly misplacing simple passes and his touch let him down on more than one occasion. This was not a matter of playing out of position (we’ll get to that), this was a matter of simple technicalities which he failed at. To make matters worse, there were little of his famous dangerous runs. When he did find the space to run, he could not beat his man for pace or with any dribbling. On the right he was anonymous and on the left, he was a weak-link in Chelsea’s game.

If you ever watched Kai Havertz play for Bayer Leverkusen then you’d know Havertz is no central midfielder. He is not lazy by any means but his intensity level is not suitable in the deeper central areas of a midfield. He operates best as a roaming number 10, gliding final passes and arriving late in the box.

Partnering him with N’golo Kante and Mason Mount may have worked a treat against Burnley, but since then it has not worked. He needs to be free to express himself to give his best performance. His best performance in a Chelsea jersey came in the Carabao Cup when he was playing directly behind Tammy Abraham although Barnsley is not the greatest test of quality. Havertz is still adapting to the Premier League and his deeper position is not helping. Add covid-19 into the mix and you have a struggling youngster. It is imperative to give him time, patience is needed.

When Wolves let Diogo Jota go, everyone wondered who they would replace him with but Wolves did not budge. Three months into the season and we are beginning to see why they trusted their squad. Pedro Neto and Daniel Podence were electric against the lethargic Chelsea full-backs and they bagged a goal each to secure three points for their side.

Podence was causing all sorts of problems for the Chelsea backline. He constantly switched sides with Neto or came to join him to cause an overload.  When Chelsea failed to clear from a corner, he pounced. He sat Ben Chilwell down in one swift body movement and had Reece James staggering before firing a shot which deflected off James into Edouard Mendy’s near post.

The 25-year-old is playing his best football since his move from Olympiacos after a period of settling in England.

Pedro Neto has been around in his few years at the top level. From Braga to Lazio to Wolves. Even though he has long been earmarked as a special talent, to see him performing this well in the PL at just 20 years of age is mind-blowing.

Neto was electric throughout the game and he was a thorn in the side for the Chelsea full-backs. The Wolves midfield was never going to dominate this game and with Jiménez out, both number 10s in the 3-4-2-1 setup were going to be relied on for creativity. Neto brought just that and more. His directness caused the blues all sorts of problems and he secured the game for his team.

In the fifth minute of added time, Chelsea surged forward to score through Chilwell. The Englishman’s cross did not meet its target and in two passes, Neto was running at Zouma with the Frenchman in retreat, hoping to stave off the shot for as long as possible. His method did not work though as Neto fired past Mendy to win the game after a very good performance.

Should Lampard’s Poor Decisions lead to a tactical reshuffle?

Mateo Kovačić has been in better form than Kai Havertz, why was he on the bench at Wolves? It was clear since the first half that the young German was off the pace, why did he wait till the 71st minute before making his substitution? There is a formation that maximizes the currently available squad, why does he not use it?

Timo Werner had his most prolific season playing off a target man in Yussuf Poulsen at RB Leipzig. Chelsea have Olivier Giroud. Kai Havertz played his best as a 10. Why not use a 4-3-1-2 diamond formation, then? It keeps a very strong 11 and allows Pulisic to come from the bench and stretch defenses as he recovers full fitness. With Lampard’s penchant for changing shape, it is surprising that he has refused to use the shape in which he played his best football (2009/2010 under Carlo Ancelotti) and one that allows his players to play their best positions.

Lampard is yet to get his team in all honesty. Chelsea rely too much on individual quality rather than a cohesive, well-thought-out plan to see off games, although the time to perfect plans on the training ground is non-existent this season. Lampard’s substitutions have been puzzling too. With Chelsea a goal down against Everton, he subbed off Kai Havertz for Tammy Abraham and the game became clunky and more disorganized as they struggled to break down the Toffees.  This time it took him till the 71st minute to make his first change, coming to a realization that should have been concluded in the first half.

Manchester City, Everton, West Ham, and Manchester United can all leapfrog Chelsea sitting in fifth place.  It is not all doom and gloom though. The gap between tenth-placed Wolves and first-place Liverpool is just a measly five points and Chelsea can close this gap. Lampard will need to make better decisions regarding his shape, starting lineup, and bench in the next few games so as not to lose touch with Liverpool in first position.

Wolves may sit tenth but being five points off the top spot is not a bad place to be especially after losing a player like Jota and their talisman Jiménez. They will be relying on their two electric wingers to keep pushing them as they strive to show their impressive levels of last season. Wolves also have Adama Traoré to call upon. At one point the winger was playing as a target-man a la Michail Antonio and this might be a brilliant strategy as Fábio Silva comes to grips with senior-level football.