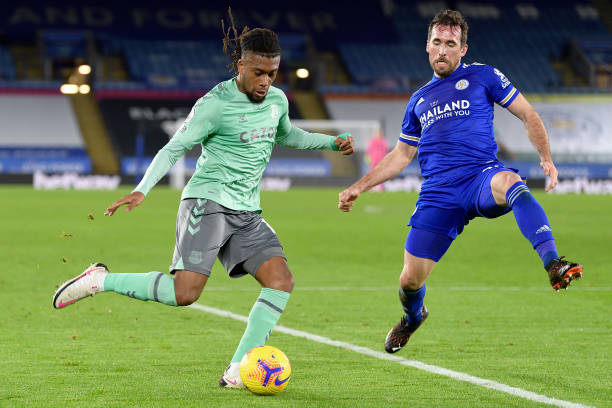 Everton’s wonderful start to the Premier League season has petered out in the intense run of fixtures, amidst suspension and injuries to key players.

The Toffees have struggled to create enough chances to win games despite the form of the league’s joint-top scorer, Dominic Calvert-Lewin. Losing creator-in-chief, James Rodríguez was bad enough but being without their first-choice fullbacks in Lucas Digne and Seamus Coleman has massively hampered their attacking balance.

Hence, Alex Iwobi, the man whose game time was expected to be most directly affected by the purchase of Rodríguez, was deployed at wing-back to provide dynamism from the flank. Although he fulfilled the role in a handful of low-pressure games when emerging at Arsenal, Iwobi plays his best football through the centre, and lacks the defensive nous required for the role.

After a trio of mixed results against Fulham, Leeds, and Burnley, Carlo Ancelotti tinkered again to protect the Nigeria International from a potential baptism of fire against Chelsea.

Iwobi continued his decent individual record against Chelsea – now six wins, two defeats, and two goals from 11 games – but was at his sparkling best against Leicester.

Up against his friends from the Nigeria Super Eagles Wilfred Ndidi and Kelechi Iheanacho. Iwobi showed his worth to Ancelotti’s side at the moment as he impressed in another pragmatic Everton showing on the right-wing.

The midfielder provided the assist for Richarlison’s 21st-minute opener, no one recorded more than his three key passes for Everton as he also completed five successful dribbles.

Iwobi got beyond veteran Christian Fuchs at will and he was ordered to swap wings with Richarlison when James Justin became an increasing threat down Leicester’s right in the second half.

Since the latest injury to Rodríguez, no one has epitomized Everton’s grit and new-found solidity than Iwobi. He forms a hard-running duet with Richarlison on the other wing to keep the team hard to break down and dangerous on the break.

This rigidity in recent games has denied teams who had a chance to go top with three points. The result of that is back to back clean sheets which have seen them rise to fifth.

Ancelotti is getting the hardworking best out of Iwobi and the Italian’s famous man-management skills are working wonders on the 24-year-old.

Pertinently, this momentum just might prompt a change of shape to allow Rodríguez – when he returns – to roam in the number 10 role in a 4-2-3-1. Especially with Allan set to miss out for a while with what looks like a torn hamstring.

Iwobi’s versatility and work ethic have made him a key player under Ancelotti and he needs to nail down a position to secure consistency in performances.

He now sets sights on a tasty hosting of Arsenal on Saturday, against whom Theo Walcott scored on his return to the Emirates last night.