Golden Oldie Dani Alves has Gold on his mind 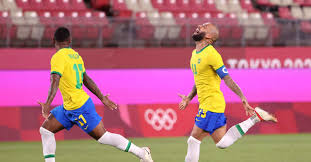 Brazil has produced some of the finest footballers of all time. Kaka, Pele, Zico, Socrates, Ronaldinho, Rivaldo, and De Lima Ronaldo have all worn the famous yellow and green of Brazil.

The Samba boys have also produced some of the finest full-backs this game has seen. Marcelo, Roberto Carlos, Cafu, José Leandro de Souza Ferreira, Jorge de Amorim Campos (Jorginho), Djalma Santos, Nilton Santos, Branco, etc. One in that long world-class production line is Dani Alves. The Barcelona legend will be playing in the 2020 Olympics Football Men’s Final at the ripe age of 38.

It is a game between the pre-tournament favourites who remained unbeaten throughout the tournament, But one eventually has to give.

Brazil face a Spain team that has gone from strength to strength after a slow start, with the likes of Pedri, Marco Asensio, Unai Simon, Dani Olmo, Pau Torres, and Mikel Oyarzabal in its ranks.

A win for Spain would mean their first football gold since winning in Barcelona almost 30 years ago; while Brazil are desperate to emulate Hungary, Uruguay, and Argentina by winning back-to-back Olympic titles.

Crucially, they are backed by a serial winner.

Dani Alves was born to a melon farmer in Bahia, Brazil. He helped on the farm but had bigger ambitions. His four brothers tell stories of how Dani would sign his name all over the walls of his house, he told them he would be a world-known superstar. His mother tells stories of an extrovert with dreams of playing in the World Cup while his father talks of a hard worker who kept going until he was worn out. Put this all together, and you begin to see where the rampaging full-back’s qualities come from; excitement from deep within, excitement for work, and an ability to tirelessly patrol the right flank from corner flag to corner flag.

Dani Alves was a resounding success at Sevilla, and after five trophies he joined Barcelona in 2008 and formed one of the scariest right-wing combinations the game has ever seen with Lionel Messi.

They formed an instant telepathic connection understanding each other’s runs and timing. The Messi-Alves combination was lethal and hugely important as Barcelona steamrolled to the sextuple under Pep Guardiola. Alves was also part of the Barcelona squad that won the treble again in 2015 under Luis Enrique as he provided over 100 assists in his eight seasons at the Catalan club, winning 23 titles in the process.

Alves savoured further trophy-laden spells at Juventus and Paris Saint Germain before returning to his homeland with São Paulo FC whom he supported as a youngster. And as a man that always wins, he has already picked up the Campeonato Paulista 2021 trophy during his time in Brazil.

At the Tokyo Olympics, the 2019 Copa America winner and his side are embracing the ethos of the games

“The passion, the will, the determination to do great things in football is huge, that makes this game special…

“Not many of us here will have the chance to play another Olympics. This is a special moment and you need to be ready for special moments, show a lot of intensity because they don’t come round again.

“We plan to give everything we have in our souls, our hearts, and our minds on this great day.”

In search of the 43rd honour of his glorious career, the Seleção will do well to listen to their captain all the way.

On Saturday, the jovial and hardworking Alves will play against his second country Spain in Tokyo 2020 hoping to take home gold. Not like he needs it for validation, this is Brazil’s third consecutive Gold Medal match in Olympic men’s football. However, Alves will forever be regarded as one of the best right-backs to grace the game, some will even say the best.

A legend who made the FIFA XI a staggering eight times, a win will elevate his already high status in the game as the most decorated player in football history. An Olympic Gold Medal would cement his place as one of the greatest ever and the undisputed best right full-back in history.

From the drylands of Bahia to legendary status, what a ride it has been for Dani!