Clasico Madrid: Will Zidane’s men rule it all?

The Football Castle > Blog > Features > Clasico Madrid: Will Zidane’s men rule it all? 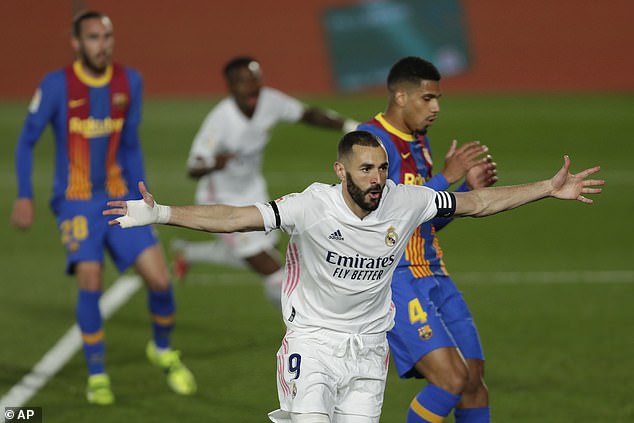 Real Madrid powered on in La Liga as they proved their mettle in El Clásico to hold off Barcelona in the title race.

The defending champions are on course for an unprecedented 35th La Liga title as they equaled Atlético Madrid at the summit on 66 points and pulled a point clear of Barca.

This most-anticipated Clásico in years lived up to its billing as Madrid fought to a 2-1 win in torrential rain at the Alfredo Di Stéfano Stadium.

However, Madrid came under heavy Barca pressure but dug deep in typical fashion.

It is still tight at the top but Madrid have got the upper hand having ended Barca’s 19-game unbeaten run. It represents their sixth consecutive win from 13 unbeaten and the significance of this win should see them over the domestic line notwithstanding what happens in Europe.

Karim Benzema opened the scoring with a cheeky back-heel, his ninth goal in seven games since returning from injury as he scored his 10th Clásico goal. Toni Kroos doubled the lead to set up a frantic end.

Even more impressive of Madrid’s performance, was the absence of first-choice centre backs Sergio Ramos and Raphaël Varane as Lucas Vázquez also went off injured in the first half.

Save for an awkward volley on the hour from Óscar Mingueza, Nacho Fernández and Éder Militão marshaled Lionel Messi aided by defensive midfielder Casemiro before he got sent off in the dying minutes.

Zinedine Zidane was pleased for the win and urged caution for the battle ahead.

“Its not going to change anything. We just have to keep going; there’s a long way to to go. But we also have to enjoy today and what we did the other day [against Liverpool], of course.”

On what could well be Clasico record goalscorer Messi’s last appearance, Madrid would be looking to assert their undoubted advantage in coming seasons.

Have we seen Lionel Messi in El Clasico for the final time? 😔 pic.twitter.com/FvLcWYfFhk

Zidane’s men have now beaten their rivals three times consecutively and done the league double over their Clásico rivals for the first time since 2007/08.

Los Blancos are battle-hardened for the big occasion and are unbeaten against top opposition in all competitions this season.

The consistency and sheer workload this season has told on Madrid who have the most injuries in Europe’s top five leagues.

That has no doubt taken its toll on Zidane’s squad who admitted his available players are at their physical limit.

‘We have picked up two big results but we have to keep going,’ said the Real Madrid coach.

Nevertheless, Madrid will look forward to Wednesday’s Champions League quarter-final second leg tie at Anfield with optimism; safe in their counter-attacking tactics which defeated Barca and keeps their weary players in the game.

Indeed, with only eight games left, it is Madrid with the momentum and advantage in the title race.

Given their record in big games, they will fancy a stunning La Liga and Champions League double.