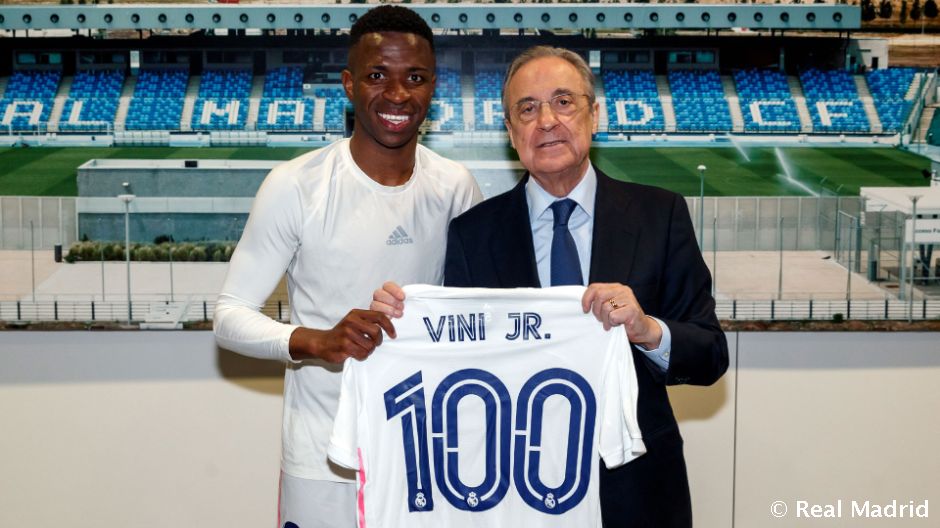 Vinícius Júnior’s ascent into senior football has been quite the opposite journey of most. He signed for Real Madrid immediately after turning 18 for €46million from Flamengo and became the first Madrid first-team player born in the 2000s.

The Brazilian marked his 100th Real Madrid appearance with a late equalizer against Real Sociedad last night in La Liga.

Madrid, who had their sights set on moving within three points of wobbling leaders Atlético ahead of the Madrid Derby on Sunday; dominated the opening half without any success as they stuck with the unfamiliar front three of Marco Asensio, Isco, and Mariano Díaz in the continued absence of Karim Benzema and many other first-team stars.

A goal down early in the second period, Vinícius came on for the final half-hour and scored the vital 89th-minute equalizer. The 1-1 draw ends Madrid’s five-game winning run and they will be disappointed for failing to leapfrog Barcelona in second and remain five behind their City rivals, who have a game in hand.

The Brazilian ended an 18-game goal drought in scoring against Sociedad and said: “It’s a big achievement to play 100 games in these colours. I’m delighted and this is a very special day for me. I’ve told my family that it’s been really exciting to make 100 appearances and to give everything for this shirt, which we love so dearly”.

“In the first half, we played really well, but we gave them a bit of space in the second half and they punished us for it. We’re disappointed we didn’t get the win we needed. We’d aimed to win all five games before the derby, but we got a draw in the last one. We have to continue on in this vein if we want to win things this season”.

Undoubtedly highly-rated by Madrid, Vinícius made his debut in 2018 shortly after joining the club and has gone on to win the Club World Cup, one La Liga title, and a Spanish Super Cup. He became the third-youngest Blanco to reach 100 Madrid appearances.

In the 2019/20 season, Vinícius was frequently a game-changer for Real Madrid. Famously helping the team find the matchwinner in the Derby and breaking the deadlock in El Clasico, Vini played a crucial role in Los Merengues winning their 34th La Liga title.

However, he has failed to maintain those heights this season. Vinícius remains a key ingredient in their squad with his energy, skill, work ethic and attitude which makes him a popular match-winner off the bench. A player of the 20-year-old’s quality is a key element of a team with his direct running to push the team forward.

The Brazilian is a confident player whose decision-making keeps letting him down, frustrating several Madrid fans as his inconsistency fluctuates between the sublime and the ridiculous.

In his 100 appearances, Vinícius has notched 12 goals and 20 assists amidst a catalog of missed chances and loose passes. Pertinently, the youngster has equalled last season’s career-high La Liga tally of three goals and is on course for his highest goal-scoring season in Madrid.

Vinicius would be hoping to win a recall for the weekend’s Derby as Madrid have been boosted by the returns of Federico Valverde and Rodrygo. With Benzema also hopeful of a return, Vinícius must make the start of his second century worth the while.

Given Barca’s inconsistent form and Atleti’s stutter of late, Madrid must apply the pressure starting sunday. Vinícius would be key to that.

He would be keen to count on all those hard experiences.