With Ramos out: Ferland Mendy typifies the Real Madrid spirit 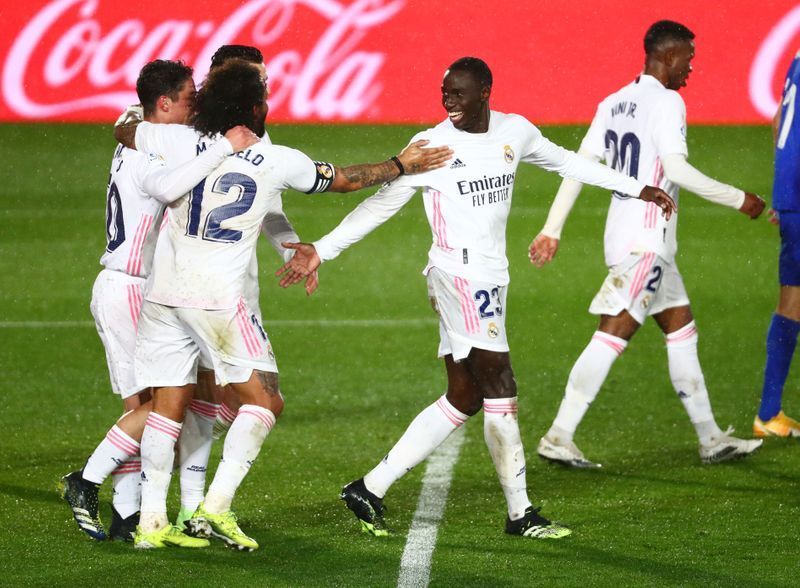 Real Madrid’s 2-0 win over neighbours Getafe told the story of adaptability and winning at all costs with several players missing out.

Karim Benzema and Ferland Mendy got the goals in an important victory especially as Los Blancos were able to keep only six players on the bench. They kept Atlético Madrid within five points at the top of the La Liga table having played two games more.

The win highlighted the importance of the unsung left-back, Mendy who got the eventual winner. Mendy is the best of Madrid’s big-money signings of 2019 as Eden Hazard continues to struggle with fitness and neither Luka Jović (now on loan) nor Éder Militão can secure a starting spot.

Indeed, Madrid have a higher win percentage when Mendy starts and he was a key player in their gritty 2019/20 La Liga title win.

He characterizes Madrid’s adaptability in their win over Getafe as injuries forced Zinedine Zidane into an unfamiliar 3-4-3 shape with Sergio Ramos, Fede Valverde, Rodrygo, Hazard, Dani Carvajal and Lucas Vázquez missing out.

Mendy has often been played on the other flank when Madrid were without their first choice right full-backs and started at left centre-back beside Marcelo against Getafe.

Real Madrid’s second goal came from a linkup between their senior left-backs as Mendy started the move from deep, exchanging a number of passes with Marcelo before finishing emphatically after a run into the box.

Manager Zinedine Zidane was understandingly pleased with his side’s versatility in rising to the challenge of 13th-placed Getafe.

“I’m happy [with the result] because of the injuries [we had],” Zidane said post-game in comments quoted by Marca. “We played a good game with a slightly different formation but it turned out well and I’m happy for the players.

“We didn’t prepare much [to play with the 3-4-3 formation], but we spent a little time before the game to talk about it and organise it, and the players have interpreted it very well. It’s good when you use a formation you’re not used to and play well.”

Once regarded as the ‘Messi of Left-backs’ during his time in Ligue 1, Mendy is an indestructible left-back who is a brilliant reader of the game, pacy and a strong tackler. These qualities make him very fundamental to Zidane’s team as he is immense in stopping attacks and bombing forward to maintain the attacking width.

The Frenchman has been dribbled past at a mere 0.5 times per game this season, following on from 0.2 in his first season in Spain.

Although Marcelo is the best attacking left-back in modern day football; it is telling that he has been totally displaced by Mendy who quite lacks the attacking verve but his constant forward runs make him a dependable option out wide. His calmness in and out of possession makes Madrid much safer with Mendy across the flank

Pertinently, the 25-year-old personifies the tenacity and never-say-die mentality of Zidane’s team.

“Today we did this because we had to adapt to the situation with lots of absences. We interpreted the match very well and I’m happy for the players because that’s not easy. We were really good, especially defensively.” Zidane said.

“I don’t think there are Madridistas who think we can’t win the league. It’s the opposite, they always think we can change things, that’s what we’ll try to do.

“With difficulties of course, but we’ll keep going, believing in what we do. There’s a lot ahead of us.”

With Captain Ramos out for a while, Mendy would be interpreting these bullish words out on the pitch. Par for the course, his reliability would come to the fore as Madrid chase Atleti’s inevitable title charge.

1 comments on “With Ramos out: Ferland Mendy typifies the Real Madrid spirit”