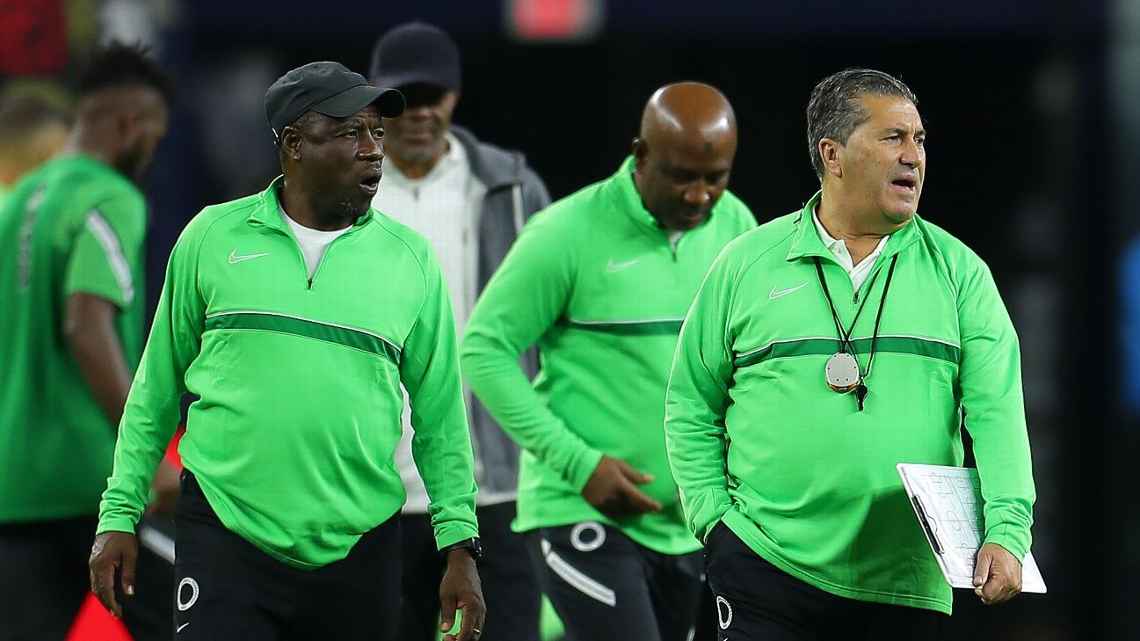 Two defeats, one game of two halves, three goals conceded, one well-worked goal, one own goal and many lapses. A new era for the Super Eagles kicked off when Jose Peseiro took charge of the team for the first time in a USA Tour with friendly games against Mexico and Ecuador.

Following a 2-1 defeat to Mexico after only two training sessions, the second game ended in a 1-0 defeat to Ecuador at the Red Bull Arena in New Jersey.

A mere glance at the results will not encourage fans who have recently endured some of the worst showings by the three-time African champions, however, the performances suggest otherwise.

Peseiro started with an experimental 3-5-2 system in Dallas against Mexico but a halftime switch to the 4-4-2 shape prompted a better showing. The latter system was retained against Ecuador with the injured Innocent Bonke making way for Katsina United’s Sani Faisal as Alex Iwobi and Joe Aribo formed a makeshift midfield pairing.

However, Villarreal’s Pervis Estupiñán headed in a wide freekick after only three minutes to give Nigeria a huge mountain to climb. The Super Eagles seized control of the game once Iwobi and Aribo got a hang of Ecuador’s counter-attacking threat as they forced the South Americans back and created good openings.

Forwards Cyriel Dessers and Terem Moffi were guilty of wasting presentable chances as the Lorient man was denied a debatable penalty call while Emmanuel Dennis missed a sitter after being set up by a wonderful Calvin Bassey cross.

The enforced midfield experiment and lack of cohesion in attack are understandable given the makeup of a second-string squad for Peseiro’s first training camp. Yet the defensive clangers in both games will leave a hint of worry.

Mexico’s opening goal came from overloading Moses Simon in his unfamiliar right wing-back role as Francis Uzoho’s save ricocheted off Santiago Gimenez into the net, while William Troost-Ekong hacked a clearance straight into his own goal. Ecuador’s goal came as a result of Estupiñán ghosting behind his markers to head past a helpless Uzoho.

Indeed, some of these can be attributed to the unfamiliarity between the players and the lack of practice together. However, that distinct lack of quality can only be bridged by intensive coaching.

The Super Eagles haven't had a decent setpiece specialist since Jay Jay Okocha. He retired over a decade ago.

Peseiro has a lot of work on his hands as the Super Eagles have now gone winless for five games having not won a friendly game since March 2019. The team has for long been conditioned to perform only in the games that matter which has now morphed into a habit of complacency.

The 62-year-old tactician has so far been an animated figure on the sidelines and is already showing the adaptability and proactiveness to make changes to the shape or individuals when things are not going well.

Notably, the Super Eagles are displaying an improved level of ball retention and they set out to control games. This will help to bring fans onside and move on from the static performances of recent times.

In a bid to push a clearly talented team to reach their potential, Peseiro would need to identify his strongest team quickly as well as foster a balanced midfield. The absence of Wilfred Ndidi proved costly in the World Cup playoff elimination to Ghana and the pairing that started against Ecuador is in dire need of a midfield destroyer to shield the defence.

These are still early days and having worked with a selection that included eight players from the Nigeria Profesional Football League, the Portuguese will be looking forward to a full-strength squad for the start of the 2023 AFCON qualifying campaign against Sierra Leone and São Tomé and Príncipe next week.

Positives have been taken from the two warm-up games, now is the time for the new era to get points on the board.