Victor Osimhen Benefitting from ‘The Spalletti Effect’ at Napoli 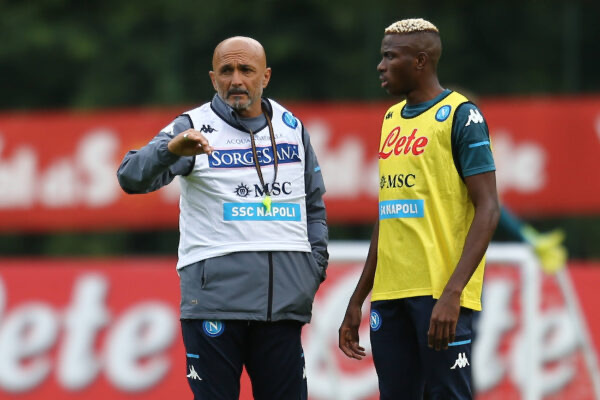 Napoli have so far been the surprise package in Serie A as Juventus have dropped off while they navigate a transitional period. Defending Champions Inter and neighbours AC Milan have kept things interesting in the race for the Scudetto but it is the Partenopei who have shown the most credentials.

Although AC Milan are unbeaten in the league this season, the Diego Armando Maradona Stadium side are the only ones with a 100% record in Europe’s top five leagues.

Gli Azzurri continued their convincing start to the season with their eighth win from as many games in a battling 1-0 victory over Torino last weekend. Lorenzo Insigne’s penalty had been saved by Vanja Milinkovic-Savic and Giovanni Di Lorenzo also saw his goal disallowed for a marginal offside, but it was a familiar name stealing the headlines once again.

Victor Osimhen leapt majestically to thump in a header after a deflection off Eljif Elmas in the final ten minutes and wheeled away in delight as Napoli savoured their perfect start.

For the Nigerian, it is a fifth goal in seven league matches and an eight strike in the last seven club games after also scoring twice in the Super Eagles’ four World Cup qualifiers.

Africa’s most expensive player is finally proving his value and staking his claim as one of the hottest young strikers in Europe. After an unfortunate spell of injuries, illness, and suspension during his maiden campaign at Napoli, Osimhen is making up for lost time in the Italian top-flight.

He has been a menace for defenders with his robustness and intelligent movement, and only João Pedro, Edin Džeko, and Ciro Immobile have scored more Serie A goals this season.

Par for the course, Osimhen’s improvement was predicted by just anyone who saw him play last season and a managerial change was expected to push him on even further. Luciano Spalletti’s appointment was hailed as an astute move by Napoli due to his pedigree and experience as well as his success with strikers.

The ex-Inter and Roma boss has a glowing history of overseeing career-best goal totals from Francesco Totti, Džeko, and Mauro Icardi.

It is imperative, then, that we take a keen look at what has changed for Osimhen under the 62-year-old Italian.

The striker was explosive in preseason and gave a hint of what was to come with a clinical brace against Bayern Munich at the Allianz Arena. However, the season began much the same way as the last as disciplinary issues threatened to undermine Osimhen’s performances with a 23rd-minute red card against Venezia on the opening day.

Spalletti has done a good job of channeling his marksman’s feistiness into getting goals, thus creating a ruthless goalscorer.

The 22-year-old has been quick to praise the impact of his manager on his blistering start to the season.

“For me, it is important to start well, this gives me confidence to score more goals. I’m happy with my performances.

“I’m sorry for what happened last year between Covid-19 and injury. Spalletti also helped me with the trust he gave me and I hope to repay it. I’m honored to have a coach like him. He gives me a lot, he stops after training and together we work hard.”

That attention to the striker’s game is obviously paying dividends and after tipping him to become a world-class striker, Spalletti’s man-management will be key for his development.

After scoring his first league goal of the 2021/22 season against Udinese, the manager touched on harnessing the emotions of the returning crowd to drive Osimhen and the team.

“Our strength is our environment. We are overwhelmed with love that can become fuel for players,” Spalletti told DAZN as quoted by Football Italia.

“We have quality in attack. Victor [Osimhen] is really strong, he lacks quality in tight spaces, but it’s hard to catch him in open spaces.

“The wingers are outstanding in one vs. one situations. The road is still long and there are many tough opponents.”

So how have they been able to create opportunities for Osimhen in ‘open spaces’?

Taking a closer look at Osimhen, he is registering more shots per game(3.81) compared to last season, leading to an improved expected goals (xG) tally of 0.66 from 0.59.

Pertinently, Napoli’s number nine is out-performing his xG by an impressive +1.2 but the most eye-catching difference from last season is the fact he has received 10% more passes from teammates.

The huge contrast seems to be that play is going through Osimhen more and he is being found by his teammates; something which was a worry last season as his attacking colleagues got to terms with creating for a specialist centre-forward rather than fashioning chances themselves.

Of course, the confidence from a perfect start to the season has also been key for team and individual.

Everything is working in the West African’s favour at the moment, and Spalletti has been fundamental in promoting an approach that is tailored for Osimhen to flourish.